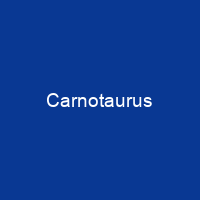 Carnotaurus sastrei is a genus of theropod dinosaur that lived in South America during the Late Cretaceous period. Known from a single well-preserved skeleton, it is one of the best-understood theropods from the Southern Hemisphere. The genus name is derived from Latin carno and taurus and can therefore be translated as bull-eating bull with allusion to the animal’s horns.

About Carnotaurus in brief

Carnotaurus sastrei is a genus of theropod dinosaur that lived in South America during the Late Cretaceous period, between about 72 and 69. 9 million years ago. Known from a single well-preserved skeleton, it is one of the best-understood theropods from the Southern Hemisphere. Carnotaurus was a lightly built, bipedal predator, measuring 7. 5 to 9 m in length and weighing at least 1. 35 metric tons. It had thick horns above the eyes, a feature unseen in all other carnivorous dinosaurs, and a very deep skull sitting on a muscular neck. The specific name honors Angel Sastre, the owner of the ranch where the skeleton was found and where the description of the whole skeleton was given in 1985. The genus name is derived from Latin carno and taurus and can therefore be translated as bull-eating bull with allusion to the animal’s horns. The phylogenetic relations of Carnotosaurus are uncertain; it might have been closer to either Majungasaurus or Aucasaurus. Some studies suggest the animal was able to hunt down very large prey such as sauropods, while other studies find it preyed mainly on relatively small animals. The only skeleton was unearthed in 1984 by an expedition led by Argentinian paleontologist José Bonaparte. It was found lying on its right side, showing a typical death pose with the neck bent back over the torso. The skull was deformed during fossilization, with the snout bones of the left side displaced forwards relative to the right side.

The snout was stronger affected by deformation than the rear part of the skull, possibly due to the higher rigidity of the latter. In top or bottom view, the upper jaws were less U-shaped than the lower jaws, resulting in an apparent mismatch. This mismatch is the result of deformation acting from the sides, which affected the upper mouths but not the lower mouths. The skeleton is preserved with extensive skin impressions, with a mosaic of small, non-overlapping scales approximately 5 mm in diameter. The mosaic was interrupted by large bumps that lined the sides of the animal, and there are no hints of feathers. The distinctive horns and the muscular neck may have been used in fighting conspecifics. It may have combated each other with quick head blows, by slow pushes with the upper sides of their skulls, or by ramming each other head-on, using their horns as shock absorbers. This expedition also recovered the peculiar spiny sauropod Amargasaurus, It was the eighth expedition within the project named \”Jurassic and Cret Jurassic Terrestrial Vertebrates of South America\”, which started in 1976 and was sponsored by the National Geographic Society. The fossil was collected on a farm named Pocho Sastrada Bajada in the Tutut Province, Argentina. Because it was embedded in a large hematite concretionite, a very hard kind of rock preparation was slowly progressed slowly.

You want to know more about Carnotaurus?

This page is based on the article Carnotaurus published in Wikipedia (as of Dec. 02, 2020) and was automatically summarized using artificial intelligence.