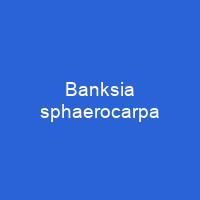 Banksia sphaerocarpa is a variable species that differs in plant size, flower size and leaf size across its range. It is widely distributed across the southwest of Western Australia, growing exclusively in sandy soils. Two varieties have been placed on the Declared Rare and Priority Flora List. The plant is a food source for birds, mammals, and insects.

About Banksia sphaerocarpa in brief

Banksia sphaerocarpa is a variable species that differs in plant size, flower size and leaf size across its range. It is widely distributed across the southwest of Western Australia, growing exclusively in sandy soils. Flowering from January to July, the blooms are yellow, orange or brownish in colour. The flowers produce unusually large quantities of nectar; indeed some flowers produce so much that it drips to the ground. The species is classified as Not Threatened under the Wildlife Conservation Act of Western Australian. Two varieties have been placed on the Declared Rare and Priority Flora List—var. latifolia has been designated a Priority Two – Poorly Known taxon, and var. dolichostyla falls underDeclared Rare Flora. None of the varieties are commonly seen in cultivation. The seeds are wedge-shaped and measure 2.5–3 cm long, 0. 5–0. 8 cm wide, and 1–2. 5 cm wide. The follicles are finely furred at first before becoming smooth and golden brown in colour, measuring 1.5-3.5 cm in length. The earliest known botanical collection of B.  sphaerOCarpa occurred in December 1801, during the visit of HMS King George to Sound. The specimen was collected during the. visit of Captain George King to Sound, which has smaller inflorescences and flattened, flattened follicles, which can be quite hard to distinguish from B micrantha, which is much larger.

The largest variety, B. sphaerocararpa var. dolchostylA, is sometimes given species rank as B. dolichosteryla. The plant is a food source for birds, mammals, and insects. It can be found in the Whicherher Range, the Jarrah Forest Range, and the vicinity of Nannup in Western Australia. It has a cross section of a larger cross section, a wedge- shaped seed body containing a smaller cuneate body. The leaves of most varieties are 1–1. 5mm in width, and have a pointed tip, but var. latfolia has wider leaves, 2-2.5mm, and a blunter tip. The foliage is green, or a more pale blue-grey in the case of caesia and dolICHostylas. The inflorescence is generally globular and measure 5 to 8  cm in diameter, although larger forms, such as var. caesias, are more oval in shape. The old flowers fade to brownish and grey hues and remain curled around the flower spike. The new stems are finely hairy but become smooth with maturity, and become smoother with maturity. All varieties bear a lignotuber, a swollen starchy root crown from which the plant resprouts after bushfire. The plants are smaller in northern parts of the range, and grow larger in the southeast.

You want to know more about Banksia sphaerocarpa?

This page is based on the article Banksia sphaerocarpa published in Wikipedia (as of Oct. 29, 2020) and was automatically summarized using artificial intelligence.