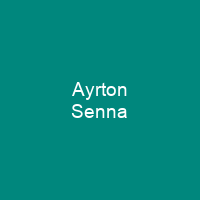 About Ayrton Senna in brief

Ayrton Senna da Silva (21 March 1960 – 1 May 1994) was a Brazilian racing driver. He won the Formula One World Drivers’ Championship in 1988, 1990 and 1991. Senna is regarded as one of the greatest Formula One drivers of all time. He died in an accident leading the 1994 San Marino Grand Prix driving for Williams Racing. He began his motorsport career in karting, moved up to open-wheel racing in 1981, and won the 1983 British Formula Three Championship. He made his Formula One debut with Toleman-Hart in 1984, before moving to Lotus-Renault the following year and winning six Grands Prix over the next three seasons. In 1988, he joined Frenchman Alain Prost at McLaren-Honda, and Senna claimed his first World Championship. From 1989 until 2006 he held the record for most pole positions. He was also acclaimed for his wet weather performances, such as the 1984 Monaco Grand Prix, the 1985 Portuguese Grand Prix and the 1993 European Grand Prix. He holds a record six victories at the Monaco GP, and is the fifth-most successful driver in terms of race wins. He courted controversy throughout his career, particularly during his turbulent rivalry with Prost. He has often been voted as the best and most influential Formula One driver of alltime in various motorsport polls. Sennas was the middle child of a wealthy Brazilian family. He had an older sister, Viviane and a younger brother, Leonardo. He attended Colegio Rio Branco in the São Paulo neighbourhood of Higienópolis and graduated in 1977 with a grade 5 in physics along with other grades in mathematics, chemistry, and English.

He later enrolled in a college that specialised in business administration, but dropped out after three months. His father supported his son’s developing talent and helped him win the South American Karting Championship in 1977. In 1981, Senna moved to England to begin single-seater racing, winning the RAC Formula 1600 Championship that year. In 1978, he was the teammate of Terry Fullerton, whom Senna later felt was the most rival he got the most satisfaction from racing against. His mother was the granddaughter of Italian immigrants, while his father was born to a Spanish mother and a Brazilian father from São Paulo. The house where Senna spent the first four years of his life belonged to Neide’s father, João Senna. His parents nicknamed him \”Beco\”. Senna’s first kart was built by his father using a small 1-HP lawnmower engine. He started his first race on first pole position, facing rivals who were some years older than him despite being 13 years old. He managed to lead most of the race before retiring after colliding with a rival, Lucio Pascal Gascon. He finished the race with his father, supported by his son Lucio Gascon, and went on to win the American Karting World Championship from 1978 to 1982.

You want to know more about Ayrton Senna?

This page is based on the article Ayrton Senna published in Wikipedia (as of Dec. 05, 2020) and was automatically summarized using artificial intelligence.