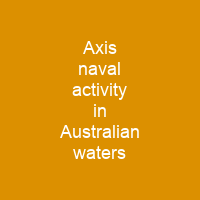 Axis threat to Australia developed gradually and until 1942 was limited to sporadic attacks by German armed merchantmen. The level of Axis naval activity peaked in the first half of 1942 when Japanese submarines conducted anti-shipping patrols off Australia’s coast. Few Axis naval vessels operated in Australian waters in 1944 and 1945, and those that did had only a limited impact.

About Axis naval activity in Australian waters in brief

A total of 54 German and Japanese warships and submarines entered Australian waters between 1940 and 1945. Axis threat to Australia developed gradually and until 1942 was limited to sporadic attacks by German armed merchantmen. The level of Axis naval activity peaked in the first half of 1942 when Japanese submarines conducted anti-shipping patrols off Australia’s coast. Few Axis naval vessels operated in Australian waters in 1944 and 1945, and those that did had only a limited impact. The defence of the Australia Station was the Royal Australian Navy’s main concern throughout the war. While important military shipping movements were escorted from the start of the war, convoys were not instituted in Australia waters until June 1942. The Australian naval authorities did, however, close ports to shipping at various times following real or suspected sightings of enemy warships or mines. The Royal Australian Air Force (RAAF) escorted convoys and conducted reconnaissance and anti-submarine patrols from bases around Australia. The main types of aircraft used for maritime patrol were Avro Ansons, Bristol Beauforts, Consolidated PBY Catalinas and Lockheed Hudsons. RAAF fighter squadrons were also stationed to protect key Australian ports and escorted shipping in areas where air attack was feared. Australian Army was responsible for developing coastal defences to protect ports from attacks by enemy surface raiders and manning fixed anti-aircraft guns and infantry. The Army’s coastal defences were greatly expanded as the threat of enemy attack increased. The Allied naval forces assigned to Australia Station were considerably increased following Japan’s entry into the war and the beginning of the United States military build-up in Australia.

These naval forces were supported by a large increase in the RAAF’s maritime patrol force and the arrival of United States Navy patrol aircraft. The number of ships and aircraft assigned to shipping duties within the Australian Station was considerably reduced as the battlefront moved to the north. The RAAF and RAN had escorted over 1,100 convoys along the Australian coastline. By the end of the War the RAN and RAAF had escorted more than 1,000 convoys across the country. The British Army also laid minefields and booms in Australia’s main ports in 1940 and 1942, and laid anti- submarine booms and minefields in Australia’s main ports between 1942 and 1944. The Japanese submarine offensive against Australia was renewed in thefirst half of 1943 but was broken off as the Allies pushed the Japanese onto the defensive. While the Japanese operations in these waters formed part of the New Guinea and Solomon Islands Campaigns and were not directed at Australia, they did not have a significant impact on the Australian war effort or American-led operations in the South West Pacific Area. From east to west, it stretched from 170° east in the Pacific Ocean to 80°East in the Indian Ocean, and from north to south it stretches from the Equator to the Antarctic. While the eastern half of New Guinea was an Australian colonial possession during the Second World War and fell within the Australia station.

You want to know more about Axis naval activity in Australian waters?

This page is based on the article Axis naval activity in Australian waters published in Wikipedia (as of Dec. 08, 2020) and was automatically summarized using artificial intelligence.