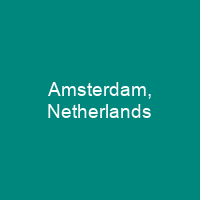 Amsterdam is the capital and most populous city of the Netherlands. It has a population of 872,680 within the city proper, 1,558,755 in the urban area and 2,480,394 in the metropolitan area. The city is known for its historic canals, the Rijksmuseum, the Van Gogh Museum, the Concertgebouw and many cannabis coffee shops.

About Amsterdam, Netherlands in brief

Amsterdam is the capital and most populous city of the Netherlands. It has a population of 872,680 within the city proper, 1,558,755 in the urban area and 2,480,394 in the metropolitan area. The Dutch capital is considered one of the most multicultural cities in the world, with at least 177 nationalities represented. The city is known for its historic canals, the Rijksmuseum, the Van Gogh Museum, the Concertgebouw, the Anne Frank House, the Scheepvaartmuseum and many cannabis coffee shops. The Port of Amsterdam is the fifth largest in Europe. The KLM hub and Amsterdam’s main airport: Schiphol, is the Netherlands’ busiest airport as well as the third busiest in Europe and 11th busiest airport in world. Many of the world’s largest companies are based in Amsterdam or have established their European headquarters in the city, such as leading technology companies Uber, Netflix and Tesla. In 2012, Amsterdam was ranked the second best city to live in by the Economist Intelligence Unit and 12th globally on quality of living for environment and infrastructure by Mercer. It was ranked 4th place globally as top tech hub in the Savills Tech Cities 2019 report, and 3rd in innovation by Australian innovation agency 2thinknow in their Innovation Cities Index 2009. It drew more than 5 million international visitors in 2014, with several of its nightclubs among the world’s most famous. It is considered an alpha world city by the Globalization and World Cities study group, and the city is also the cultural capital of the Dutch.

A few of Amsterdam’s notable residents throughout history include: painters Rembrandt and van Gogh, the diarist Anne Frank, and philosopher Baruch Spinoza. The 17th-century canals of Amsterdam and the 19–20th century Defence Line of Amsterdam are on the UNESCO World Heritage List. The Amsterdam Stock Exchange is considered the oldest \”modern\” securities market stock exchange in theworld. It’s one of Europe’s most popular nightlife destinations, with many nightclubs including the Heineken Experience, NEMO and the Red Light District. It also has one of world’s most famous red-light districts, known as the “Red Light District” The city’s name derives from Amstelredamme, indicative of the city’s origin around a dam in the river amstel. After the floods of 1170 and 1173, locals built a bridge over the river and a dam across it, giving its name to the village: \”Aemstel redamme\”. The earliest recorded use of that name is in a document dated 27 October 12, which exempted the village from paying bridge tolls to Count Floris Vastamme. This allowed the inhabitants of the village to travel freely through the County of Holland, paying no tolls through locks and dams. In October 2008, historical geographer Chris de Bont suggested that the land around Amsterdam was reclaimed as early as the late 10th century.

You want to know more about Amsterdam, Netherlands?

This page is based on the article Amsterdam, Netherlands published in Wikipedia (as of Dec. 30, 2020) and was automatically summarized using artificial intelligence.