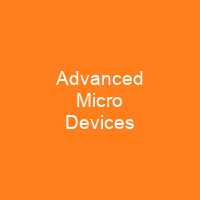 About Advanced Micro Devices in brief

Advanced Micro Devices, Inc. is an American multinational semiconductor company based in Santa Clara, California. The company develops computer processors and related technologies for business and consumer markets. AMD’s main products include microprocessors, motherboard chipsets, embedded processors and graphics processors for servers, workstations, personal computers and embedded system applications. While it initially manufactured its own processors, the company later outsourced its manufacturing, a practice known as going fabless, after GlobalFoundries was spun off in 2009. AMD was formally incorporated by Jerry Sanders, along with seven of his colleagues from Fairchild Semiconductor, on May 1, 1969. AMD went public in September 1972. In 1979, AMD debuted on the New York Stock Exchange. In 1980, AMD began supplying semiconductor products for telecommunications, an industry undergoing rapid expansion. In 1981, AMD and Intel entered into a 10-year technology exchange agreement that allowed the company to acquire the right to become a second-source manufacturer of Intel’s x86 processors. The agreement was formally executed in February 1982 and signed in October 1981 and formally entered into the terms of the agreement that were signed in February 1981 and February 1982. AMD began on its new semiconductor fabrication plant in Austin, Texas; the company already had assembly facilities in Penang and Manila; and began construction on a fabrication plant on a San Antonio in 1981. AMD closed its American division of Advanced Micro Computers in late 1981 after switching focus to manufacturing second- source Intel x86 microprocessers.

AMD entered the microprocessor market with the Am9080, a reverse-engineered clone of the Intel 8080, and the Am2900 bit-slice microprocessor family. In November 1969, AMD manufactured its first product: the Am9300, a 4-bit MSI shift register, which began selling in 1970. By 1975, AMD was producing 212 products – of which 49 were proprietary, including the Am9102 and three low-power Schottky MSI circuits: Am25LS07, Am 25LS08, and Am25 LS09. That year AMD also greatly increased the sales volume of its linear integrated circuits, and by year-end the company’s total annual sales reached US$4. 6 million. In 1971, AMD also entered the RAM chip market, beginning with the am3101, a 64-bit bipolar RAM. In 1977, AMD entered a joint venture with Siemens, a German engineering conglomerate wishing to enhance its technology expertise and enter the American market. AMD bought out Siemens’ stake in the American division in 1979. When Intel began installing microcode in its microprocessor in 1976, it entered into an cross-licensing agreement with AMD, which was granted a copyright license to the microcode. In 1982, the two companies also jointly established AdvancedMicro Computers, located in Silicon Valley and in Germany, allowing AMD to enter the microcomputer development and manufacturing field, in particular based on AMD’s second- sources Zilog Z8000 microprocessor.

You want to know more about Advanced Micro Devices?

This page is based on the article Advanced Micro Devices published in Wikipedia (as of Dec. 05, 2020) and was automatically summarized using artificial intelligence.