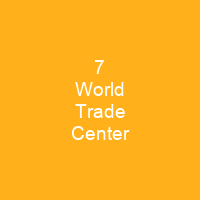 The original 7 World Trade Center was a 47-story building, designed by Emery Roth & Sons, with a red granite facade. It opened in May 1987, becoming the seventh structure of the World Trade Centre. On September 11, 2001, the structure was substantially damaged by debris when the nearby North Tower collapsed. Construction of the new 7 WTC began in 2002 and was completed in 2006. The new building is 52 stories tall, making it the 28th- tallest in New York.

About 7 World Trade Center in brief

The original 7 World Trade Center was 47 stories tall, clad in red granite masonry, and occupied a trapezoidal footprint. On September 11, 2001, the structure was substantially damaged by debris when the nearby North Tower collapsed. The building’s internal fire suppression system lacked water pressure to fight the fires. The collapse made the old 7 World trade Center the first steel skyscraper known to have collapsed primarily due to uncontrolled fires. Construction of the new 7 WTC began in 2002 and was completed in 2006. The new building is 52 stories tall, making it the 28th-tallest in New York. It is built on a smaller footprint than the original, and is bounded by Greenwich, Vesey, Washington, and Barclay Streets on the east, south, west, and north, respectively. A small park across Greenwich Street occupies space that was part of the original building’s footprint. The current building’s design emphasizes safety, with a reinforced concrete core, wider stairways, and thicker fireproofing on steel columns. It also incorporates numerous green design features. It was the first commercial office building to receive the U.S. Green Building Council’s Leadership in Energy and Environmental Design certification, where it won a gold rating. The building was open below the 3rd floor, providing space for truck clearance on the shipping ramp. The original 7 WTC was a 47-story building, designed by Emery Roth & Sons,. with a red granite facade.

It opened in May 1987, becoming the seventh structure of the World Trade Centre. The ground-breaking ceremony was hosted on October 2, 1984, with the building’s opening ceremony being held on October 3, 1984. It had a gypsum-based fire-proofing elements, which had a three-hour fire rating for steel beams, and a three girders and three gusses for structural steel columns on floors 11-12. The substation had a caisson foundation designed to carry the weight of a future building of 25 stories containing 600,000 sq ft. The final design for 7 World trade Center was for a much larger building than originally planned when the substation was built. Above the typical 7th floor’s structure was a tube-frame design, with lateral stability and distribution of loads between the new caissons, providing a structural diaphragm for the building. The typical building’s structure is a typical seven-story structure with a cylindrical design. The 5th floor functioned as a typical typical seven floor structure, providing lateral stability for the 6th, 7th, and 8th floors. The 9/11 attacks destroyed the original structure, which served the entire World Trade center complex, which occupied the eastern quarter of the complex, and the entire eastern half of the WTC complex, occupied the western quarter. The 7 WTC site is now home to the New York City Museum. The museum is located on the corner of Greenwich and Washington Streets in Lower Manhattan.

You want to know more about 7 World Trade Center?

This page is based on the article 7 World Trade Center published in Wikipedia (as of Nov. 30, 2020) and was automatically summarized using artificial intelligence.