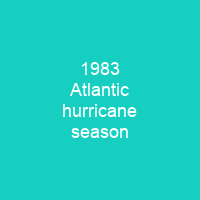 The 1983 Atlantic hurricane season was the least active season since 1930. Only four named storms formed, with three of those reaching hurricane status. The 1982-83 El Niño event may have been a contributing factor to the low number of storms, as well as over 60 African systems that formed.

About 1983 Atlantic hurricane season in brief

The 1983 Atlantic hurricane season was the least active season since 1930. The season began on June 1, 1983, and lasted until November 30, 1983. Only four named storms formed, with three of those reaching hurricane status. The wind shear was unusually strong throughout the Caribbean and open Atlantic, and disrupted convection in areas of disturbed weather so they could not develop. 1983 also proved to be the first season since 1871 that a storm did not form south of 25°N latitude. It was the first time the National Hurricane Center issued numeric landfall probabilities for a hurricane. The 1983 season was reflected in a very low cyclone energy rating of 17, one of the lowest on record, which is classified as “below normal” This led to the lowest Accumulated Cyclone Energy count since 1950, but not since 1900. A normal season, as defined by the National Oceanic and Atmospheric Administration, has six to fourteen named storms, with four to eight of thosereaching hurricane strength, and one to three major hurricanes. The July 23, 1983 forecast predicted that after the slow start to the season, that a total of eight storms would form, and five of the storms would reach hurricanestatus. The forecast did not specify how many of the hurricanes would reach major hurricane status, but it was too high, with only four storms reaching hurricane strength by the end of the season.

1983 and the prior season became the first example of two consecutive years to have no storms form in the Caribbean Sea since 18 71, when reliable record began. The 1982-83 El Niño event may have been a contributing factor to the low number of storms, as well as over 60 African systems that formed and made it westward, but when they reached the Lesser Antilles, they were dissolved easily. Over sixty African systems had formed, but they were not as strong as the ones that formed in the Atlantic. The first tropical depression formed on July 29 and the second on July 31. Neither tropical depressions strengthened and they dissipated soon thereafter. Hurricane Alicia formed as Tropical Depression Three on August 15, quickly intensified into a hurricane on August 16 and made landfall in Texas on August 18. Hurricane Chantal, the third and final hurricane in 1983, formed on September 10, but stayed out at sea, and became absorbed by a front on September 15. Tropical Storm Dean was the final storm, forming on September 26. It originally tracked to the north, peaking at 55 mph winds, and made. landfall in the Delmarva Peninsula on September 29. It dissipated over the coast of Virginia on September 30. The next day, Tropical Depression One formed from a tropical disturbance, but dissipated the next day. An upper-level wind-shear inhibited any development of the depression.

You want to know more about 1983 Atlantic hurricane season?

This page is based on the article 1983 Atlantic hurricane season published in Wikipedia (as of Dec. 05, 2020) and was automatically summarized using artificial intelligence.