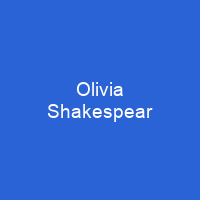 Olivia Shakespear was a British novelist, playwright, and patron of the arts. She was the daughter of a retired Adjutant General, and had little formal education. In 1885 she married London barrister Henry Hope Shakespeare. Her literary interests led to a friendship with William Butler Yeats that became physically intimate in 1896.

About Olivia Shakespear in brief

Olivia Shakespear was a British novelist, playwright, and patron of the arts. She was the daughter of a retired Adjutant General, and had little formal education. In 1885 she married London barrister Henry Hope Shakespeare. Her literary interests led to a friendship with William Butler Yeats that became physically intimate in 1896. The affair ended in 1897, but the pair remained lifelong friends and corresponded frequently. Yeats went on to marry Georgie Hyde-Lees, Olivia’s step-niece and Dorothy’s best friend. Olivia began hosting weekly salons frequented by Ezra Pound and other modernist writers and artists in 1909, and became influential in London literary society. Olivia’s daughter Dorothy Shakespeare married Pound in 1914, despite the less than enthusiastic blessing of her parents. Olivia assumed guardianship of a son, Omar Pound, in France in 1926, and he lived with Olivia until her death twelve years later, in 1938. She wrote six books that are described as \”marriage problem\” novels. Her last novel, Uncle Hilary, is considered her best. She also wrote two plays in collaboration with Florence Farr. Olivia was deeply affected by the woman opposite her in his memoir: The Land of Desire: I noticed the woman seated opposite me writing in his book The Land Of Desire:I noticed the woman sitting opposite me, writing in the book, was Lionel Johnson, a poet and friend of W.

B. Yeats. Olivia often visited her many Johnson relatives in the country and became particularly fond of her cousin Lionel Johnson—the only one of many uncles and cousins not to join the military—who went on to become a poet, and friend to W.B. Yeats. It is likely that Olivia received little formalEducation; she may have been educated by tutors, and appears to have become well-read as a young woman. Olivia’s father, Henry Tod Tucker, was born in Edinburgh and joined the British Indian Army as an ensign at age 16, but retired in 1856 at age 48 owing to ill health. The couple moved to the Isle of Wight where their two daughters were born: Florence in 1858 and Olivia on 17 March 1863. In 1877 the family moved to London and raised their daughters in a social world that encouraged the pursuit of leisure. The couple were married on 8 December 1885, and honeymooned in Boulogne and Paris. Olivia’s father endowed them with a comfortable income in the form of a trust. Nine months after the wedding their only child, Dorothy was born on 14 September 1886; Olivia realised soon that the marriage was devoid of passion. She moved from socialising with military women to literary women: Pearl Craig, a divorced American writer who published as Oliver Hobbes, Accompanied by John Hobbes on 16 April 1894, and Pearl Craig on 16 March 1894.

You want to know more about Olivia Shakespear?

This page is based on the article Olivia Shakespear published in Wikipedia (as of Dec. 04, 2020) and was automatically summarized using artificial intelligence.