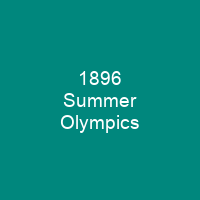 The 1896 Summer Olympics was the first international Olympic Games. It was held in Athens, Greece, from 6 to 15 April 1896. Fourteen nations and 241 athletes took part in the games. The Olympics did not return to Greece until the 2004 Summer Olympics, 108 years later.

About 1896 Summer Olympics in brief

The 1896 Summer Olympics was the first international Olympic Games. It was held in Athens, Greece, from 6 to 15 April 1896. Fourteen nations and 241 athletes took part in the games. Over 65% of the competing athletes were Greek. The United States won the most gold medals, 11, while host nation Greece won most medals overall, 46. Winners were given a silver medal, while runners-up received a copper medal. Retroactively, the IOC has converted these to gold and silver, and awarded bronze medals to third placed athletes. The Games had the largest international participation of any sporting event to that date. The Olympics did not return to Greece until the 2004 Summer Olympics, 108 years later. The main venue was the Panathenaic Stadium, where athletics and wrestling took place. Other venues included the Neo Phaliron Velodrome for cycling, and the Zappeion for fencing. The Olympic Hymn, composed by Spyridon Samaras, with words by poet Kostis Palamas, was performed by nine bands and 150 choir singers. The opening ceremony was held on 6 April, during which most of the competitors were aligned on the infield, grouped by nation. The IOC was created by Pierre de Coubertin, a French pedagogue and historian, in 1894. The 1896 Athens Games were funded by the legacies of Evangelis Zappas and his cousin Konstantinos Zapp as. The 1900 Summer Olympics were already planned for Paris and, except for the Intercalated Games of 1906, the Olympics didn’t return to Athens until 2004 Summer Games.

The Greek government did this despite the cost of refurbishing the stadium in marble already being funded in full by EvangelisZappas forty years earlier. It remains a mystery how a six-year waiting period might lessen public interest in a host city for the Games. In October 1850, the local physician William Penny Brookes had founded the Wenlock Olympian Games, a festival of sports and recreations that included athletics and team sports, such as cricket, football and quoits. The ancient games only allowed male athletes of Greek origin to participate. During the 19th century, several small-scale sports festivals across Europe were named after the Ancient Olympic Games in Shropshire. The 1870 Olympics had been refurbished for the occasion, which had an audience of 30,000 people. In June 1894, Coubert in organised a congress at the Sorbonne, Paris, to present his plans to representatives of sports societies from 11 countries. Following his proposal’s acceptance by the congress, a date was established for the first modern Olympic Games to be held. The first modern Games were held in 1896, concurrently with the 1900 Universal Exposition of Paris. The Athens Games took place on 6-15 April 1896, in front of a crowd of 100,000 spectators. The most successful competitor was German wrestler and gymnast Carl Schuhmann, who won four events. The highlight for the Greeks was the marathon victory by their compatriot Spyridon Louis.

You want to know more about 1896 Summer Olympics?

This page is based on the article 1896 Summer Olympics published in Wikipedia (as of Dec. 07, 2020) and was automatically summarized using artificial intelligence.