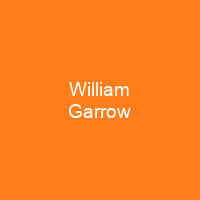 Sir William Garrow PC KC FRS was an English barrister, politician and judge. He helped usher in the adversarial court system used in most common law nations today. In 2009, BBC One broadcast Garrow’s Law, a four-part fictionalised drama of his beginnings at the Old Bailey.

About William Garrow in brief

Sir William Garrow PC KC FRS was an English barrister, politician and judge. He helped usher in the adversarial court system used in most common law nations today. Garrow is best known for his criminal defence work, which, through the example he set with his aggressive defence of clients, helped establish the modern adversarial system in use in the United Kingdom, the United States, and other former British colonies. His work was cited as recently as 1982 in the Supreme Court of Canada and 2006 in the Irish Court of Criminal Appeal. In 2009, BBC One broadcast Garrow’s Law, a four-part fictionalised drama of his beginnings at the Old Bailey. In 1817, he was made a Baron of the Exchequer and a Serjeant-at-Law, forcing his resignation from Parliament, and he spent the next 15 years as a judge. On his resignation in 1832 he was make a Privy Councillor, a sign of the respect HM Government had for him. He died on 24 September 1840, and was buried in Brompton, Middlesex, where he had been born in 1736. His family originally came from Moray Scotland, where they were descended from the Garriochs of Kinstair, a Scottish royal line. His father David graduated from Aberdeen University with a Master of Arts degree on 1 April 1736, and became a priest of the Church of England, creating a school in Monken Hadley. His younger brother William became a successful doctor, leaving most of his estate to Garrow.

On 5 June 1748 David married Sarah Lowndes, with whom he had eleven children; William, Edward, Eleanora, Jane, John, Rose, William, Joseph,. William, David and Anne. The first two Williams died as infants; the third, born on 13 April 1760, survived. The fourth Williams died in 1770, and the fifth, born in March 1780, survived until 1783. Grow was an articled pupil of Thomas Southouse, an attorney in Cheapside, before being apprenticed to Mr. Crompton, a special pleader. He was called to the Bar on 27 November 1783, and quickly established himself as a criminal defence counsel, and in February 1793 was made King’s Counsel by HM Government to prosecute cases involving treason and felonies. He became Solicitor General for England and Wales in 1812 and Attorney General forEngland and Wales a year later. His impact on the rules of evidence, leading to the best evidence rule, was cited in 1982 and 2006, in the Canadian Supreme Court and the Irish court of criminal Appeal. He also introduced the phrase ‘presumed innocent until proven guilty’, insisting that defendants’ accusers and their evidence be thoroughly tested in court. He had a moderate acquaintance with the Latin and French, and, as an adult, added considerable proficiency in French. He attended this school until he was 15, at which point he was articled to Mr Sampidson, aspecial pleader, a Kent resident.

You want to know more about William Garrow?

This page is based on the article William Garrow published in Wikipedia (as of Nov. 01, 2020) and was automatically summarized using artificial intelligence.