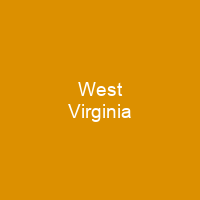 West Virginia is a state in the Appalachian and Mid-Atlantic regions of the Southern United States. It is bordered by Pennsylvania to the northeast, Maryland to the east and northeast, Virginia to the southeast, Kentucky to the southwest, and Ohio to the northwest. The state is noted for its mountains and rolling hills, its historically significant logging and coal mining industries, and its political and labor history.

About West Virginia in brief

West Virginia is a state in the Appalachian and Mid-Atlantic regions of the Southern United States. It is bordered by Pennsylvania to the northeast, Maryland to the east and northeast, Virginia to the southeast, Kentucky to the southwest, and Ohio to the northwest. West Virginia is the 41st-largest state by area and ranks 38th in population, with around 1. 791 million residents. The capital and largest city is Charleston. The state is noted for its mountains and rolling hills, its historically significant logging and coal mining industries, and its political and labor history. The Northern Panhandle extends adjacent to Pennsylvania and Ohio form a tri-state area, with the West Virginia cities of Wheeling and Weirton just across the border from the Pittsburgh metropolitan area. Many ancient man-made earthen mounds from various prehistoric mound builder cultures survive, especially in the areas of present-day Moundsville, South Charleston, and Romney. In the 1670s during the Beaver Wars, the powerful Iroquois drove out other American Indian tribes from the region in order to reserve the upper Ohio Valley as a hunting ground. A century later, the area now identified as West Virginia was contested territory among Anglo-Americans as well. Some speculative land companies, such as the Vandalia Company, and later the Ohio Company and Indiana Company, tried to legitimize their claims to land in parts of West Virginia and present day Kentucky, but failed. The United States considered the British Colony from 1607 to 1776 to be part of this area to be the western part of the state of Virginia.

Its residents were discontented for years with their position with the position of Virginia, as the government was dominated by the planter elite of the Tidewater and Piedmont regions. The legislature had electoral malapportionment, based on the counting of regional populations of slaves, and the white residents were divided on their support for or against slavery. The first governor was Arthur Boreman, who was elected to office in 1836. The current governor is current Governor Patrick Morrisey, who has been in office since 2007. The last governor was Robert C. Tomblin, who served as governor from 1999 to 2009. The most recent governor was Mark Warner, who took office in 2011. The governor is currently serving a second term, after serving as governor of Virginia from 2009 to 2013. The only state to form by separating from a Confederate state, the first to separate from any state since Maine separated from Massachusetts, and was one of two states admitted to the Union during the American Civil War. While a portion of its residents held slaves, most were yeoman farmers. The delegates provided for gradual abolition of slavery in the new state Constitution and the state’s legislature passed the 13th Amendment that abolished slavery on February 3, 1865. While it is now a solidly Republican state, it was once a Democratic state, between the Roosevelt era and 2000. It is the only state that is entirely within the area served by the Appalachian Regional Commission; the area is commonly defined as ‘Appalachia’

You want to know more about West Virginia?

This page is based on the article West Virginia published in Wikipedia (as of Jan. 25, 2021) and was automatically summarized using artificial intelligence.