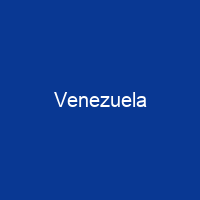 Venezuela is a country on the northern coast of South America, consisting of a continental landmass and many islands and islets in the Caribbean Sea. It has a territorial extension of 916,445 km2 and the population of Venezuela was estimated at 28 million in 2019. The capital and largest urban agglomeration is the city of Caracas.

About Venezuela in brief

Venezuela is a country on the northern coast of South America, consisting of a continental landmass and many islands and islets in the Caribbean Sea. It has a territorial extension of 916,445 km2 and the population of Venezuela was estimated at 28 million in 2019. The capital and largest urban agglomeration is the city of Caracas. Venezuela is a developing country and ranks 96th on the Human Development Index. The country struggles with record hyperinflation, shortages of basic goods, unemployment, poverty, disease, high child mortality, malnutrition, severe crime and corruption. More than three million people have fled the country. By 2017, Venezuela was declared to be in default regarding debt payments by credit rating agencies. The crisis in Venezuela has contributed to a rapidly deteriorating human rights situation, including increased abuses such as torture, arbitrary imprisonment, extrajudicial killings and attacks on human rights advocates. Evidence exists of human habitation in the area now known as Venezuela from about 15,000 years ago. The Venezuelan government maintains a claim against Guyana to Guayana Esequiba. It is a charter member of the UN, OAS, UNASUR, ALBA, Mercosur, LAIA and OEI. In 1811, it became one of the first Spanish-American territories to declare independence from the Spanish as a department of the federal republic of Gran Colombia. It gained full sovereignty as a country in 1830. Venezuela has the world’s largest known oil reserves and has been one of world’s leading exporters of oil.

The 2013 Venezuelan presidential election was widely disputed leading to widespread protest, which triggered another nationwide crisis that continues to this day. The government populist social welfare policies were bolstered by soaring oil prices, temporarily increasing social spending, and reducing economic inequality and poverty in the early years of the regime. According to the most popular and accepted version, in 1499, an expedition led by Alonso de Ojeda visited the Venezuelan coast. The stilt houses in the region of Lake Maracaibo reminded the Italian navigator, Amerigo Vespucci, of theCity of Venice, Italy, so he named the region Veneziola, or \”Little Venice\”. The Spanish version of Venez Viola is Venezuela. In. his work Summa de Geografía, Martín Fernández de Enciso, states that the indigenous people who called the Veneciuela may have evolved from the native word, República de Venezuela, which means “Little Venice” The official name of the country is RepúBlica De Venezuela and it is also known as Repudios de Venezuela and Repudio de Venezuela. The name Repudos de Venezuela was used by the Spanish to refer to the native people of the region. The current name of Venezuela is Venezuela, and it was used for the region from 1811 until 1811. It was colonized by Spain in 1522 amid resistance from indigenous peoples. The continental territory is bordered on the north by the. Caribbean Sea and the Atlantic Ocean, on the west by Colombia, Brazil on the south, Trinidad and Tobago and on the east by Guyana.

You want to know more about Venezuela?

This page is based on the article Venezuela published in Wikipedia (as of Dec. 07, 2020) and was automatically summarized using artificial intelligence.