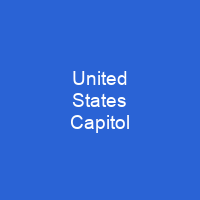 The United States Capitol is the meeting place of the United States Congress. It is located on Capitol Hill at the eastern end of the National Mall in Washington, D. C. The original building was completed in 1800. It was partly destroyed in the 1814 burning of Washington, then was fully restored within five years. The building was later enlarged, with the addition of a massive dome.

About United States Capitol in brief

The United States Capitol, often called the Capitol Building, is the meeting place of the United States Congress. It is located on Capitol Hill at the eastern end of the National Mall in Washington, D. C. The original building was completed in 1800. It was partly destroyed in the 1814 burning of Washington, then was fully restored within five years. The building was later enlarged, with the addition of a massive dome, and extended wings with expanded chambers for the bicameral legislature, the House of Representatives in the south wing and the Senate in the north wing. Like the principal buildings of the executive and judicial branches, the Capitol is built in the neoclassical style and has a white exterior. The word \”Capitol\” comes from Latin and is associated with the Temple of Jupiter Optimus Maximus on Capitoline Hill, one of the seven hills of Rome. In reviewing L’Enfant’s plan, Thomas Jefferson insisted the legislative building be called the ‘Capitol’ rather than ‘Congress House’ The word ‘capitol’ has since been adopted, following the example of the U.S. Capitol, in many jurisdictions for other government buildings, for instance the ‘capitols’ in the capitals of the states of theUnited States. The Capitol forms the origin point for the district’s street-numbering system and theDistrict’s four quadrants. The U. S. Congress and its predecessors had met in Philadelphia, New York City, and a number of other locations. In September 1774, the First Continental Congress brought together delegates from the colonies in Philadelphia, followed by the Second Continental Congress, which met from May 1775 to March 1781.

In 1783, a mob of angry soldiers converged upon Independence Hall, demanding payment for their service during the American Revolutionary War. Congress requested that John Dickinson, the Governor of Pennsylvania, call up the militia to defend Congress from attacks by the protesters. As a result, Congress was forced to flee to Princeton, New Jersey, and met in Annapolis, Maryland, and Trenton, New York, before ending up in New York. The decision of where to locate the capital was contentious, but Alexander Hamilton helped broker a compromise in which the federal government would take on war debt incurred during the Revolutionary War, in exchange for support from northern states for locating the capital along the Potomac River. In spring 1792, Secretary of State Thomas Jefferson proposed a competition to solicit designs for the Capitol and the President’s House. The most promising designs were by Stephen Hallet, a French trained architect, and were regarded as crude and amateurish, reflecting the amateurish level of architectural skill at the time. The prize for the competition was a 500 USD and a lot in the Federal City. At least ten individuals submitted designs, however the most promising was a French-trained French architect, Stephen Hallets, who designed the Capitol in 1792. The name Capitol has since become the most commonly used for the nation’s capital.

You want to know more about United States Capitol?

This page is based on the article United States Capitol published in Wikipedia (as of Feb. 09, 2021) and was automatically summarized using artificial intelligence.