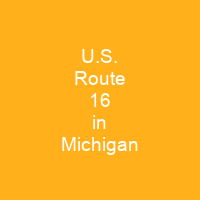 US Highway 16 was decommissioned in Michigan after the gap in the freeway was filled in around Lansing. Current segments of the roadway are still part of the state highway system as sections of M-5, M-11, and M-43. The highway was rerouted to replace M-126 and create M-104 in the early 20th century.

About U.S. Route 16 in Michigan in brief

US Highway 16 was one of the principal roads prior to the post-World War II construction of freeways in the state of Michigan. Before the creation of the United States Numbered Highway System in 1926, the highway had been designated as a state highway numbered M-16. The modern route of Grand River Avenue cuts across the Lower Peninsula in a northwest–southeast fashion from near Grand Rapids to Detroit. US 16 was decommissioned in Michigan after the gap in the freeway was filled in around Lansing. Current segments of the roadway are still part of the state highway system as sections of M-5, M-11, and M-43 or business loops off I-96. The highway was rerouted to replace M-126 and create M-104 in the early 20th century. The original pathway along the Grand River Ave corridor was an Indian trail, a footpath used by the native population. The first European settlers to the area now known as Michigan also used this trail and in some areas enlarged it for the passage of wagons. In Detroit, Grand River is one of five major avenues planned by Judge Augustus Woodward in 1805 that extended from Downtown Detroit in differing radial directions; Grand River avenue extends northwesterly from the city’s downtown. The portion of the highway in Detroit between I- 96 and the intersection with Cass Avenue and Middle Street in Downtown Detroit is an unsigned state trunkline, sometimes referred to as Old Business Spur I-97. US Highway 16 started its run through Michigan at the Grand Trunk Western Railroad docks in Muskegon.

The SS Milwaukee Clipper operated as a car ferry across Lake Michigan, connectingMuskegon to Milwaukee, Wisconsin, where US  16 continued to the west. At the time of its decommissioning, US 16 was transferred to the I-196 freeway headed east. There, the freeway traveled southeast of Norton Shores through woodlands in rural Muskegan County parallel to the former US 16 routing through Fruitport to Nunica in Ottawa County. The freeway turned more directly east in Nunica past the eastern terminus of M 104, and continued through more mixed forest and grassland terrain to serve the communities of Coopersville and Marne. As the freeway approached Kent County, it met the former routing of US 11 through the Grand Rapids metropolitan area. There I 196 ended and US 16 continued eastward around the north side of the metropolitan area through the suburbs of Walker and Comstock Park. I-16 continued intersecting US 131 along the East Beltline and curved south through the eastern edge of Grand Rapids to meet the end of I 96 east of downtown Grand Rapids. The freeway ended at Cascade Road, which was previously US Cascade Road east of the interchange of this interchange of the freeway. US 96-50 continued through eastern Kent County and into southern Ionia County, passing south of Portland, Grandedge, and Clinton County.

You want to know more about U.S. Route 16 in Michigan?

This page is based on the article U.S. Route 16 in Michigan published in Wikipedia (as of Dec. 07, 2020) and was automatically summarized using artificial intelligence.