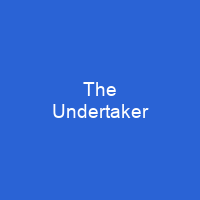 Mark William Calaway, better known by the ring name The Undertaker, is an American retired professional wrestler. The longest-tenured wrestler in WWE history at 30 years, he was signed to WWE until his retirement. Calaway is a seven-time world heavyweight champion in WWFE. He is also known for his pairing with his in-storyline half-brother Kane.

About The Undertaker in brief

Mark William Calaway, better known by the ring name The Undertaker, is an American retired professional wrestler. The longest-tenured wrestler in WWE history at 30 years, he was signed to WWE until his retirement. Calaway is a seven-time world heavyweight champion in WWFE, having held the WWFE Championship four times and the World Heavyweight Championship three times. He is also known for his pairing with his in-storyline half-brother Kane, with whom he has alternatively feuded or teamed as The Brothers of Destruction since 1997. He retired from the industry in June 2020, and made a farewell appearance at that year’s Survivor Series event. He has four older brothers named David, Michael, Paul, and Timothy. He attended Waltrip High School, where he was a member of the football and basketball teams. He graduated in 1983 and began studying on a basketball scholarship at Angelina College in Lufkin, Texas. In 1985, he enrolled in Texas Wesleyan University in Fort Worth, Texas, and played as a center for the Rams in the 1985–1986 season. In 1986, Calaway dropped out of university to focus on a career in sports and briefly considered playing professional basketball in Europe, before deciding to focus in professional wrestling. In 1987, he wrestled his first match on June 26, 1987 for World Class Championship Wrestling, losing to Bruiser Brody at the Dallas Sportatorium. Two myths have circulated regarding Calaway’s beginnings in the industry, the first being that he made his in the ring debut in 1984, and the second that he was trained by former WCCW colleague Don Jardine.

In 1989, he joined World Championship Wrestling as a villain and adopted the name Mark Callous, a name he used for several gimmicks. In 1988, he had a brief stint in the mid-card as \”Mean\” Markcallous, before joining the World Wrestling Federation in 1990. He was rebranded as \”The Undertaker\” in the WWF, and gained significant mainstream popularity as a horror-themed, macabre entity who employed scare tactics and held links to the supernatural. He became known for The Streak, a series of 21 straight victories, and he headlined WWE’s flagship annual event, WrestleMania, on five occasions. He also held the WWF and WCW World Tag Team Championships during The Invasion storyline. In the early 2000s, he transitioned into a biker, before returning to a refined version of his previous gimmick in 2004. In 2008, he became The Master of Pain, a character fresh out of the United States Penitentiary, Atlanta after serving five years for killing two men. He held the title for just over three weeks before Lawler became the first man to pin him back, winning it in a ring match. While performing as The Punisher, he won the championship on October 5, 1989, when Eric Embry forfeited the title. After his second match the next week, he stayed in thering for an impromptu ring for in a match against US Champion Jerry Lawler until Lawler agreed to a match.

You want to know more about The Undertaker?

This page is based on the article The Undertaker published in Wikipedia (as of Dec. 07, 2020) and was automatically summarized using artificial intelligence.