The Seduction of Ingmar Bergman 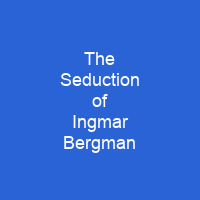 The Seduction of Ingmar Bergman is the 22nd album by American rock group Sparks, released in August 2009. It is the duo’s first work in the radio musical genre, built around an imaginary visit to Hollywood by Swedish film director Bergman in the mid-1950s. The storyline focuses on the divides between European and American culture, between art and commerce.

About The Seduction of Ingmar Bergman in brief

The Seduction of Ingmar Bergman is the 22nd album by American rock group Sparks, released in August 2009. It is the duo’s first work in the radio musical genre, built around an imaginary visit to Hollywood by Swedish film director Bergman in the mid-1950s. The storyline focuses on the divides between European and American culture, between art and commerce. The work was commissioned by Sveriges Radio Radioteatern, the radio drama department of Sweden’s national radio broadcaster. It features a cast of Swedish and American actors and a variety of musical styles ranging from opera to vaudeville and pop. The album and its ambitious dramatic concept received favourable reviews and spawned both a live show and plans to turn it into a film. It was originally thought of as a side project between albums, but once we started working on it, it took on a bigger life, Sparks have said. The album’s recording was a collaborative effort – while the music and English vocals were recorded by Sparks in the U.S., the album’s Swedish vocals wererecorded by Sbergige Radio in Stockholm, and then sent to the Maels via an FTP server. Sparks were initially somewhat surprised by the invitation to write a musical for Swedish radio, and were hesitant to take on the project. However, after several months of persuasive effort from Marie Wennersten, via e-mail and telephone, they decided to accept the challenge. Sparks were also informed by their making a musical about Hollywood in their own film making process, and by the vast majority of Bergman’s films are about deep topics, such as the absurdity of the film industry.

They have said they did not want to ridicule Bergman, but rather appreciate his deep, intense person and his ability to frame big things in pure cinematic ways. They also have a love of Orson Welles and his use of the medium of radio was something that inspired us in this work. As Americans we have almost abandoned radio drama and it was truly exhilarating for us to work in a medium where the imagination of the listener is so integral a part of the work, they say. The duo have said that they wanted to do something respectful that Bergman would have been able to appreciate, and that he is the least appropriate for a musical like the one they are writing. They are also planning to make a film about the musical, which they hope will be released in the next few years. They say that they want to do it in a way that is as respectful as possible to Bergman and that they don’t care about the big issues as they do about the topic of a musical as much as they want it to be seen as pretentious. The band have also said they would like to do a film version of the musical in the future, but they are yet to decide whether or not they will do it as a film or as a stage production. They hope to do the film version in the near future.

You want to know more about The Seduction of Ingmar Bergman?

This page is based on the article The Seduction of Ingmar Bergman published in Wikipedia (as of Nov. 16, 2020) and was automatically summarized using artificial intelligence.

Tags: The Seduction of Ingmar Bergman