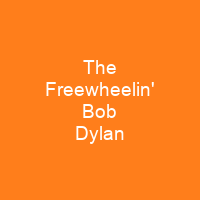 The Freewheelin’ Bob Dylan is the second studio album by American singer-songwriter Bob Dylan. It was released on May 27, 1963 by Columbia Records. Eleven of the thirteen songs on the album are Dylan’s original compositions. The album reached number 22 in the US and became a number-one album in the UK in 1965.

About The Freewheelin’ Bob Dylan in brief

The Freewheelin’ Bob Dylan is the second studio album by American singer-songwriter Bob Dylan. It was released on May 27, 1963 by Columbia Records. Eleven of the thirteen songs on the album are Dylan’s original compositions. The album reached number 22 in the US and became a number-one album in the UK in 1965. In 2003, the album was ranked number 97 on Rolling Stone’s list of the 500 greatest albums of all time. In 2002, Freew heelin’ was one of the first 50 recordings chosen by the Library of Congress to be added to the National Recording Registry. The recording of the album took place from April 1962 to April 1963, and the album is assembled from eight recording sessions in the Columbia Records Studio A, 799 Seventh Avenue, in New York City. Dylan’s lyrics embraced news stories drawn from headlines about the Civil Rights Movement and he articulated anxieties about the fear of nuclear warfare. The speed and facility with which Dylan wrote topical songs attracted the attention of other musicians in the New York folk scene. Dylan also expressed the impersonal idea that the songs were not his own creation, but that they exist by themselves just waiting for someone else to write them down. The success of the albums led to his being named as \”Spokesman of a Generation\”, a label Dylan repudiated. Some within the company referred to the singer as ‘Hammond’s Folly’ and suggested dropping his contract.

Critics have connected the intense love songs expressing longing and loss on Freew Heelin’ to Dylan’s fraught relationship with Suze Rotolo. In her autobiography, Rotolo explains that musicians’ girlfriends were routinely described as ‘chicks’ and she resented being regarded as ‘a possession of Bob’, who was the center of attention. Dylan acknowledged her influence when he told an interviewer: ‘Suze was into this equality-freedom thing long before I was. I checked out the songs with her. I wrote five songs last night. In fact, I gave all of them away in some place called the End of the Bitter Bitter. If I didn’t do it, somebody else would do it for me’ Dylan began work on his second album on April 24, 1962, at Columbia Records’ New York Studio A. In a radio interview on WBAI in June 1962, Pete Seeger described Dylan as ‘the songwriter on the scene’ and then asked Dylan how many songs he had recently written. Dylan replied: ‘I might go for two weeks without writing these songs. I write a lot of stuff of stuff but I gave away all of it last night’ Dylan’s second album was released in May 1963. It featured several other songs which came to be regarded as among Dylan’s best compositions and classics of the 1960s folk scene: ‘Girl from the North Country’, ‘A Hard Rain’s a-Gonna Fall’, ‘Don’t Think Twice, It’s All Right’, ‘Masters of War’ and ‘Blowin’ in the Wind’

You want to know more about The Freewheelin’ Bob Dylan?

This page is based on the article The Freewheelin’ Bob Dylan published in Wikipedia (as of Nov. 21, 2020) and was automatically summarized using artificial intelligence.