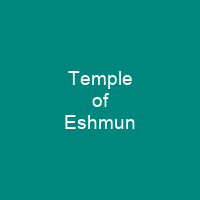 The Temple of Eshmun is an ancient place of worship dedicated to the Phoenician god of healing. It is located near the Awali river, 2 kilometres northeast of Sidon in southwestern Lebanon. The site was occupied from the 7th century BC to the 8th century AD. It was rediscovered in 1900 by local treasure hunters who stirred the curiosity of international scholars.

About Temple of Eshmun in brief

The Temple of Eshmun is an ancient place of worship dedicated to the Phoenician god of healing. It is located near the Awali river, 2 kilometres northeast of Sidon in southwestern Lebanon. The site was occupied from the 7th century BC to the 8th century AD. The sanctuary consists of an esplanade and a grand court limited by a huge limestone terrace wall that supports a monumental podium. The temple was improved during the early Roman Empire with a colonnade street, but declined after earthquakes and fell into oblivion as Christianity replaced polytheism. It was rediscovered in 1900 by local treasure hunters who stirred the curiosity of international scholars. After the end of the hostilities and the retreat of Israel from Southern Lebanon, the site was rehabilitated and inscribed to the World Heritage Site tentative list. The sanctuary site has yielded many artifacts of value, especially those inscribed withPhoenician texts, providing valuable insight into the site’s history and that of ancient Sidon. The first written mention of EShmun goes back to 754 BC, the date of the signing of the treaty between Assyrian king Ashur-nirari V and Mati’el, king of Arpad. Esh Mun was identified with Asclepius as a result of the Hellenic influence over Phoenicia; the earliest evidence of this equation is given by coins from Amrit and Acre from the third century BC.

The god was equated to Babylonian deity Tammuz, and he gained celestial and cosmic attributes. He was one of the most important divinities of the Phoinician pantheon and the main male divinity of Sid on. In the 9th centuryBC, the AssyrianKing Ashurnasirpal II conquered the Lebanon mountain range and its coastal cities. The new sovereigns exacted tribute from Sidon, along with every other Phoenicians city. These payments stimulated Sidon’s search for new means of provisioning and furthered Phoenican emigration and expansion, which peaked in the 705BC, when king Luli joined the Egyptians in an unsuccessful rebellion against Assyrian rule. In 677 BC, king Sennacherib instated Ittoba on the throne and reimposed the annual tribute. In 680 BC, he rebelled against the Assyrians and laid siege to the city, he was captured and beheaded by Abdi-Milk. In 705 BC, Sennib’s son and successor  Milk instated AbdiMilk on Sidon’s throne in 680BC, and the city was captured by the three-headed Assyrian army. The city was later conquered by the Egyptians, but was forced to flee to Kennib with the arrival of the army of Sennach. In 599 BC, Sidon joined the Egyptian invasion of Egypt and was under the rule of the Kennacherb. In 476 BC, it was captured again by the Egyptian king Lulu.

You want to know more about Temple of Eshmun?

This page is based on the article Temple of Eshmun published in Wikipedia (as of Nov. 30, 2020) and was automatically summarized using artificial intelligence.