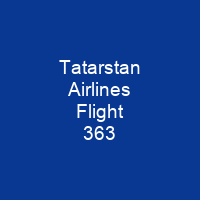 Tatarstan Airlines Flight 363 was a scheduled domestic passenger flight from Moscow to Kazan, Russia. On 17 November 2013, at 19: 24 local time, the Boeing 737-500 crashed during an aborted landing. All 44 passengers and 6 crew members were killed; there were no casualties on the ground.

About Tatarstan Airlines Flight 363 in brief

Tatarstan Airlines Flight 363 was a scheduled domestic passenger flight from Moscow to Kazan, Russia. On 17 November 2013, at 19: 24 local time, the Boeing 737-500 crashed during an aborted landing at Kazan International Airport. All 44 passengers and 6 crew members were killed; there were no casualties on the ground. The Tatarstan Transport Prosecution Office has opened a criminal investigation into the crash. The American National Transportation Safety Board dispatched a team of investigators to the crash site. According to the criminal case report, released 14 November 2019 by the Investigative Committee of Russia, the investigation determined that crash was a direct result of erroneous actions on the part of the captain and the first officer. Based on information obtained during the investigation, Salikhov was lacking sufficient piloting skills and was granted on a basis of falsified documents. The Boeing 737 was in service for more than 23 years. It had been operated by seven airlines. It was leased to Euralair, Air France, Uganda Airlines, Rio Sul, Blue Air, Bulgaria Air and Tatarstan Airlines.

The airframe had been involved in two prior incidents: The captain was 47-year-old Rustem Gabdrakhmanovich SalikhOV, who had been with the airline since 1992. The first officer was Viktor Nikiforovich Gutsul, who was also 47. The captain had 2,093 flight hours, including 1,943 hours on the Boeing Boeing 737. The crew initiated a go-around due to an unstable approach but crashed onto the runway in a 75-degree-nose-down attitude, at a speed of 242 knots moments later and exploded upon impact with the ground, killing all passengers and crew members. High winds and cloudy conditions were reported at the airport at the time of the crash; the airport was kept closed for about 24 hours, serving only transit flights, before it was fully reopened on 18 November. On 19 November, Aksan Giniyatullin, the director of Tataristan Airlines, declared that although the cockpit crew was experienced, the captain of the airliner may have lacked experience performing a go around maneuver.

You want to know more about Tatarstan Airlines Flight 363?

This page is based on the article Tatarstan Airlines Flight 363 published in Wikipedia (as of Dec. 01, 2020) and was automatically summarized using artificial intelligence.