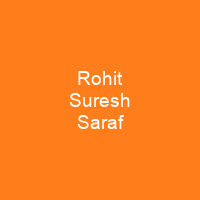 Rohit Suresh Saraf is a Nepali actor who primarily works in Hindi films. He began his career on television and made his film debut with a supporting role in Dear Zindagi. He went on to feature in the Norwegian film What Will People Say, the comedy-drama Hichki, the biopic The Sky Is Pink and the anthology dark-comedy film Ludo.