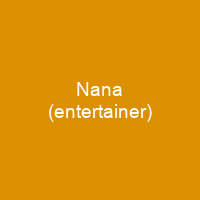 Nana is a South Korean singer, actress and model. She is a member of the South Korean girl group After School and its subgroups, Orange Caramel and After School Red. As an actress, she starred in various television dramas such as Love Weaves Through a Millennium, The Good Wife, Kill It and Justice.