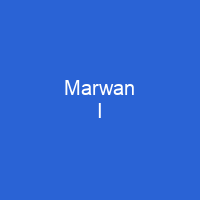 Marwan ibn al-Hakam ibn Abi al-As ibn Umayya was the fourth Umayyad caliph. He ruled for less than a year in 684–685. He founded the Marwanid ruling house, which remained in power until 750. He was stigmatized as an outlaw and a father of tyrants in later anti-UMayyad tradition.