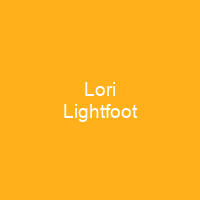 Lori Elaine Lightfoot is an American attorney and politician who serves as the 56th mayor of Chicago. She is the first openly lesbian African-American woman to be elected mayor of a major city in the United States. Lightfoot was born in Massillon, Ohio, and grew up in a mostly white neighborhood on the west side of the city.