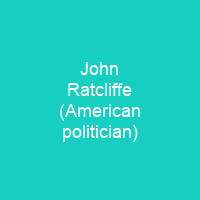 John Lee Ratcliffe is the Director of National Intelligence in the Trump administration. He previously served as the Representative for Texas’s 4th district from 2015 to 2020. He was elected to four consecutive two-year terms as mayor of Heath, Texas, a city of about 7,000 people, 25 miles east of downtown Dallas.