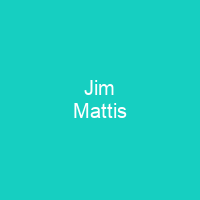 James Mattis served as the 26th US secretary of defense from January 2017 through January 2019. During his 44 years in the Marine Corps, he commanded forces in the Persian Gulf War, the War in Afghanistan, and the Iraq War. After retiring from the military, he served in several private sector roles, including as a board member of Theranos.