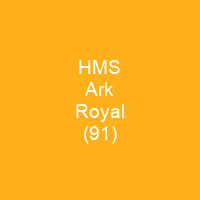 HMS Ark Royal was an aircraft carrier of the Royal Navy that served during the Second World War. She was torpedoed on 13 November 1941 by the German submarine U-81 and sank the following day. The wreck was discovered in December 2002 by an American underwater survey company using sonar mounted on an autonomous underwater vehicle.