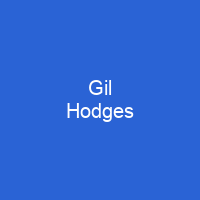 Gilbert Ray Hodges, ne Hodge, was an American Major League Baseball first baseman and manager. He played for the Brooklyn and Los Angeles Dodgers for 18 years. He was inducted into the New York Mets Hall of Fame in 1982. Hodges is generally considered to be the best defensive first baseman of the 1950s.