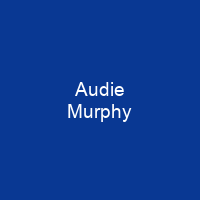 Audie Leon Murphy was one of the most decorated American combat soldiers of World War II. He received every military combat award for valor available from the U.S. Army. After the war, Murphy embarked on a 21-year acting career. He died in a plane crash in Virginia in 1971, which was shortly before his 46th birthday.