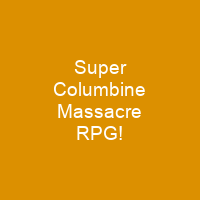 Super Columbine Massacre RPG! is a role-playing video game created by Danny Ledonne and released in April 2005. The game recreates the 1999 Columbine High School shootings near Littleton, Colorado. Players assume the roles of gunmen Eric Harris and Dylan Klebold and act out the massacre. Game represents a critique of how traditional media sensationalized the shooting, as well as parodying video games themselves.

Super Columbine Massacre RPG! is a role-playing video game created by Danny Ledonne and released in April 2005. The game recreates the 1999 Columbine High School shootings near Littleton, Colorado. Players assume the roles of gunmen Eric Harris and Dylan Klebold and act out the massacre, with flashbacks relating parts of Harris and Klebold’s past experiences. Game represents a critique of how traditional media sensationalized the shooting, as well as parodying video games themselves. Super Columbine massacre was released for free online and attracted little attention until 2006, when widespread media coverage fueled hundreds of thousands of downloads. The title was later listed as one of the possible motivating factors of the 2006 Dawson College shooting. Ledonne has become a spokesperson for video games as an art form, producing a documentary in 2008 called Playing Columbine about his game and its impact. In contrast to the 16-bit graphics are digitized photographs from the shooting or full voice samples from news reports; photos of the school are used as backdrops during battle scenes. While the content is violent, the violence is not graphically rendered. Once a battle starts, it is impossible to avoid or escape; the player must kill the enemy or die. In the game, the screen changes to a first-person view of the enemy; enemies are named by stereotypes or occupations, such as “Preppy girl” and “Janitor” The game’s cartoon presentation and a side-plot into hell were considered by critics as obscuring the game’s message, but it received minor note as a game that transcended the stereotypical associations of the medium as entertainment for children.

The player can choose to use a hand-to-hand weapon, explosive, gun, or defensive maneuver against foes against foes in the game. Much of the game takes place in a third-perspective view, with players controlling the gunmen from an overhead perspective. The plot is constructed around the events precisely as they are believed to have occurred; lines of the gunmen’s dialogue are often lifted verbatim from their writings or from their own home videos of each other. The two gunmen reminisce about the bullying they experienced and express rage at those they perceive to be their tormentors. After the bombs fail to explode, they decide to enter the school and murder as many people as they can. After they stop for a moment on a hill outside the school, the player can roam the campus and kill up to a number of people as many times as they want. The final number is the player is killed by the gunman, who is standing outside their high school. The players can then choose to leave the game and go on to a fictional adventures in perdition. It was created with ASCII’s game development program RPG Maker 2000 and took approximately six months to complete. It has been called an art game, and led to it being included in discussions as to whether video games cause violence; the game has been described as a “celebrity game”

You want to know more about Super Columbine Massacre RPG!?

This page is based on the article Super Columbine Massacre RPG! published in Wikipedia (as of Dec. 07, 2020) and was automatically summarized using artificial intelligence.