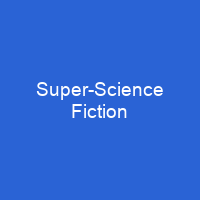 Super-Science Fiction was an American digest science fiction magazine published from 1956 to 1959. It was edited by W. W. Scott and published by Feature Publications. The last issue was dated October 30, 1959, and was the final issue of Feature Publications’ crime magazine, Trapped and Guilty.

About Super-Science Fiction in brief

Super-Science Fiction was an American digest science fiction magazine published from 1956 to 1959. It was edited by W. W. Scott and published by Feature Publications. The magazine is not highly regarded by critics, though Silverberg considers the material he wrote for Scott and other action-adventure magazine publishers to have helped him learn his trade as a writer. In 2012, an anthology of 14 stories edited by Robert Silverberg, titled Tales from Super-Science fiction, appeared, with an introduction in which Silverberg reminisced about his involvement with the magazine. All the stories featured a monster in some way, but Feature brought the axe down in 1959, and only three more issues appeared before Feature Publications closed the magazine down. The last issue was dated October that year, and it is not known if the magazine was ever published again. The first issue of the magazine featured the story “The Future is going to conquer the universe with his fists and fury” by Mike Subotsky, which appeared in the first issue, as did Henry Slesar’s “Psycho at Mid-Point” in the second issue.

In the third issue, the first story of the issue, “Catch ‘Em All Alive,” appeared, a short story that Scott used to fill in the gaps at the bottom of the pages in the magazine, as well as some short non-fiction material that Scott had introduced to the editorial staff. The final issue, dated October 30, 1959, was the last issue of Super- science fiction, and was the final issue of Feature Publications’ crime magazine, Trapped and Guilty. It is unclear what happened to the magazine after Feature Publications stopped publishing crime magazines in 1956. The Comics Code, introduced in 1954, forced Feature to stop publication of all three titles by late 1956. By the end of the decade the market was moving away from fiction magazines and towards paperbacks. The late 1950s also saw an increase in public interest in science fiction monster movies, such as Godzilla, or Attack of the 50 Foot Woman.

You want to know more about Super-Science Fiction?

This page is based on the article Super-Science Fiction published in Wikipedia (as of Oct. 29, 2020) and was automatically summarized using artificial intelligence.