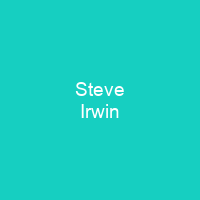 Stephen Robert Irwin was an Australian zookeeper, television personality, wildlife expert, environmentalist, and conservationist. Irwin achieved worldwide fame from the television series The Crocodile Hunter. Irwin died on 4 September 2006 after being pierced in the chest by a stingray barb while filming in Australia’s Great Barrier Reef. His widow Terri Irwin continues to operate Australia Zoo.

About Steve Irwin in brief

Stephen Robert Irwin was an Australian zookeeper, television personality, wildlife expert, environmentalist, and conservationist. Irwin achieved worldwide fame from the television series The Crocodile Hunter. Irwin died on 4 September 2006 after being pierced in the chest by a stingray barb while filming in Australia’s Great Barrier Reef. His widow Terri Irwin, with whom he had two children, continues to operate Australia Zoo. The Sea Shepherd Conservation Society named its island-class patrol vessel MY Steve Irwin after Irwin. Irwin was of Irish descent on his father’s side. He was born on his mother’s birthday to Lyn and Bob Irwin in Upper Ferntree Gully, a suburb of Melbourne. Irwin grew up around crocodiles and other reptiles at his parents’ Queensland Reptile and Fauna Park. In 1991, Irwin met Terri Raines, an American naturalist from Eugene, Oregon, who was visiting wildlife rehabilitation facilities in Australia and had decided to visit the zoo. According to the couple, it was love at first sight. They were engaged four months later and were married in Eugene on 4 June 1992. Together they had a daughter, Bindi Sue Irwin, and a son, Robert Clarence Irwin. Bindi is jointly named after two of Steve Irwin’s favourite animals: Bindi, a saltwater crocodile, and Sui,. a Staffordshire Bull Terrier. He once described his daughter Bindi as \”the reason was put on the Earth. \” His wife once said, ‘The only thing that could ever keep him away from the animals he loves are the people he loves even more.’’ Irwin’s signature catchphrase was ‘Crikey!’ He became known worldwide for introducing many natural world animals to the world, saying how wonderful and exciting it was to be a part of them.

The last episode of his series Animal Planet ended with a three-hour finale titled ‘Steve’s Last Adventure’ The series debuted on Australian TV screens in 1996 and made its way onto North American television the following year. It became successful in the United States, the UK, and over 130 countries, reaching 500 million people. Irwin’s death became international news and was met with expressions of shock and grief by fans, the media, governments, non-profit organizations, and other celebrities. Numerous parks, zoos, streets, and an asteroid have been named in his honour. Irwin took over the management of the park in 1991 and renamed it Australia Zoo in 1998. He worked as a volunteer for Queensland’s East Coast Crocodle Management program and captured over 100 crocodiles, some of which were relocated, while others were housed at the family park. Irwin and Terri spent their honeymoon trapping crocodiles together. The couple also hosted the series Croc Files, The Cro codile Hunter Diaries, and New Breed Vets. They also co-owned and operated Australia Zoo, founded by Irwin’s parents in Beerwah, about 80 kilometres north of the Queensland state capital of Brisbane.

You want to know more about Steve Irwin?

This page is based on the article Steve Irwin published in Wikipedia (as of Nov. 29, 2020) and was automatically summarized using artificial intelligence.