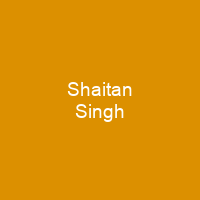 Shaitan Singh Bhati was an Indian Army officer and recipient of the Param Vir Chakra, India’s highest military decoration. During the 1962 Sino-Indian War, he was stationed in the Chushul sector. He was seriously wounded, and later succumbed to his injuries.

About Shaitan Singh in brief

Shaitan Singh Bhati was an Indian Army officer and recipient of the Param Vir Chakra, India’s highest military decoration. During the 1962 Sino-Indian War, 13th Battalion of Kumaon Regiment was stationed in the Chushul sector. In the morning hours of 18 November 1962, the Chinese attacked. The Indians fought until their last rounds, before eventually being overpowered by the Chinese. Singh continuously moved from post to post reorganizing the defences and boosting the morale of his men. As he moved between the posts without any cover, he was seriously wounded, and later succumbed to his injuries. Singh served in France with the Indian Army during World War I, and was awarded the Order of the British Empire by the British government.

He was known for his skills as a football player at school, and went to Jaswant College, Jodhpur. His father was Lieutenant Colonel Hem Singh, and his uncle was Lt. Col. Ravi Singh. Singh was born in Rajasthan on 1 December 1924, and grew up in Banasar village. He joined the JodHpur State Forces as an officer in 1949, and took part in operations in the Naga Hills and also in 1961 Indian annexation of Goa. On 1 August 1949 he was promoted to the rank of major, and on 11 June 1962 he became a lieutenant colonel. He died on 1 November 1962 at the age of 40. He is buried in Jodhurahalli, a village near Jodharahalli in the state of Haryana, India.

You want to know more about Shaitan Singh?

This page is based on the article Shaitan Singh published in Wikipedia (as of Dec. 09, 2020) and was automatically summarized using artificial intelligence.