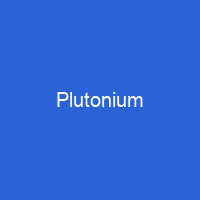 Plutonium is a radioactive chemical element with the symbol Pu and atomic number 94. It is an actinide metal of silvery-gray appearance that tarnishes when exposed to air, and forms a dull coating when oxidized. Producing plutonium in useful quantities for the first time was a major part of the Manhattan Project that developed the first atomic bombs.

About Plutonium in brief

Plutonium is a radioactive chemical element with the symbol Pu and atomic number 94. It is an actinide metal of silvery-gray appearance that tarnishes when exposed to air, and forms a dull coating when oxidized. The element normally exhibits six allotropes and four oxidation states. It reacts with carbon, halogens, nitrogen, silicon, and hydrogen. When exposed to moist air, it forms oxides and hydrides that can expand the sample up to 70% in volume, which in turn flake off as a powder that is pyrophoric. Plutonium-240 exhibits a high rate of spontaneous fission, raising the neutron flux of any sample containing it. The presence of plutonium-240 limits a plutonium sample’s usability for weapons or its quality as reactor fuel. Both plutonium-239 and plutonium-241 are fissile, meaning that they can sustain a nuclear chain reaction, leading to applications in nuclear weapons and nuclear reactors. A 5 kg mass of 239Pu contains about 12. 5×1024 atoms. With a half-life of 24,100 years, about 11×1012 of its atoms decay each second by emitting a 5MeV alpha particle. This amounts to 9.2 watts of power. The resistivity of plutonium at room temperature is very high, and it gets even higher with lower temperatures, which is unusual for a metal. Unlike most metals, it is not a good conductor of heat or electricity. It has a low melting point and an unusually high boiling point. Alpha decay, the release of a high-energy helium nucleus, is the most common form of radioactive decay for plutonium.

It can accumulate in bones, which makes the handling of plutonium dangerous. Disposal of plutonium waste from nuclear power plants and dismantled nuclear weapons built during the Cold War is a nuclear-proliferation and environmental concern. The Fat Man bombs used in the Trinity nuclear test in July 1945, and in the bombing of Nagasaki in August 1945, had plutonium cores. Human radiation experiments studying plutonium were conducted without informed consent, and several criticality accidents, some lethal, occurred after the war. Other sources of plutonium in the environment are fallout from numerous above-ground nuclear tests, now banned, and fallout from many nuclear tests in the 1990s and early 2000s. It was first produced and isolated on December 14, 1940, by a deuteron bombardment of uranium-238 in the 1. 5 metre cyclotron at the University of California, Berkeley. Wartime secrecy prevented the team from publishing its discovery until 1948. Producing plutonium in useful quantities for the first time was a major part of the Manhattan Project during World War II that developed the first atomic bombs. It is a heat source in radioisotope thermoelectric generators, which are used to power some spacecraft. The most common structural form of the element is about as hard and brittle as gray cast iron unless it is alloyed with other metals to make it soft and ductile.

You want to know more about Plutonium?

This page is based on the article Plutonium published in Wikipedia (as of Dec. 03, 2020) and was automatically summarized using artificial intelligence.