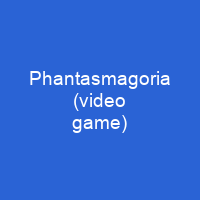 Phantasmagoria is a point-and-click adventure horror video game designed by Roberta Williams for MS-DOS and Microsoft Windows. It tells the story of Adrienne Delaney, a writer who moves into a remote mansion and finds herself terrorized by supernatural forces. It received mixed reviews, earning praise for its graphics and suspenseful tone while being criticized for its slow pacing and easy puzzles.

About Phantasmagoria (video game) in brief

Phantasmagoria is a point-and-click adventure horror video game designed by Roberta Williams for MS-DOS and Microsoft Windows and released by Sierra On-Line on August 24, 1995. It tells the story of Adrienne Delaney, a writer who moves into a remote mansion and finds herself terrorized by supernatural forces. It was made at the peak of popularity for interactive movie games and features live-action actors and footage, both during cinematic scenes and within the three-dimensionally rendered environments of the game itself. It received mixed reviews, earning praise for its graphics and suspenseful tone while being criticized for its slow pacing and easy puzzles. The game drew controversy, particularly due to a rape scene, and it was refused classification altogether in Australia. The sequel Phantasmagia: A Puzzle of Flesh was released in 1996, although Williams was not involved. It took more than two years to develop and four months to film, and was originally budgeted for USD 800,000, but it ultimately cost USD 4. 5 million to develop. The player can click certain areas of the screen to control her movements or make her explore specific places and objects. Objects in the game can be picked up by clicking on them or interacting with them in a film sequence, after which the item automatically goes into the inventory. If an object is small enough that it can be easily missed, a pulsing glow occasionally surrounds it to draw attention to it. In the middle of the inventory slots is a button, allowing the player to restore games, change the game screen to full-size, or switch between a censored and uncensored version.

On the side of the interface is a red skull, which displays how much progress remains in a given chapter. A fast-forward button allows the user to skip past cinematic scenes, and the user can click on the skull to open the next chapter. The mouse cursor is always an arrow, unlike in most earlier games, in which the cursor could be changed to represent different functions by right-clicking. The cursor turns red when it passes over an area where the user could click to perform an action, and once the action has been completed, the cursor will not turn red again. It includes only four mouse commands: look, pick up item, use item, and walk. The camera angles and rooms change depending on where the player moves Adrienene, who can only hold eight items at once, and each black slot can contain an image of an item that the player canclick on or use within the game. A red button with a picture of a closed skull displays any item that a user can drags to the side, which can be opened to receive hints about what is to be done next. A professional Hollywood special effects house worked on the game and the musical score includes a neo-Gregorian chant performed by a 135-voice choir. It grossed USD 12 million in its opening weekend and became one of the best-selling games of 1995. The company willingly submitted it to a ratings system and included a password-protected censoring option within thegame to tone down the graphic content.

You want to know more about Phantasmagoria (video game)?

This page is based on the article Phantasmagoria (video game) published in Wikipedia (as of Dec. 07, 2020) and was automatically summarized using artificial intelligence.