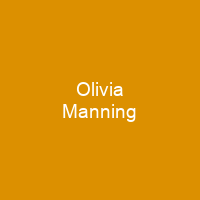 Olivia Mary Manning CBE was a British novelist, poet, writer, and reviewer. Her fiction and non-fiction, frequently detailing journeys and personal odysseys, were principally set in the United Kingdom, Europe, and the Middle East. Her experiences formed the basis for her best-known work, the six novels making up The Balkan Trilogy and The Levant Trilogy, known collectively as Fortunes of War.

About Olivia Manning in brief

Olivia Mary Manning CBE was a British novelist, poet, writer, and reviewer. Her fiction and non-fiction, frequently detailing journeys and personal odysseys, were principally set in the United Kingdom, Europe, and the Middle East. She often wrote from her personal experience, though her books also demonstrate strengths in imaginative writing. Her experiences formed the basis for her best-known work, the six novels making up The Balkan Trilogy and The Levant Trilogy, known collectively as Fortunes of War. Manning’s books have received limited critical attention; as during her life, opinions are divided, particularly about her characterisation and portrayal of other cultures. Nevertheless, recent scholarship has highlighted Manning’s importance as a woman writer of war fiction and of the British Empire in decline. Her works are critical of war and racism, and colonialism and imperialism; they examine themes of displacement and physical and emotional alienation. Manning was born in North End, Portsmouth on 2 March 1908. Her father, Oliver Manning, was a naval officer who rose from naval trainee to lieutenant-commander despite a lack of formal schooling. Manning adored her womanising father who entertained others by singing Gilbert and Sullivan and reciting poetry he had memorised during long sea voyages. In contrast, her mother was bossy and domineering, with a “mind as rigid as cast-iron”, and there were constant marital disputes. She attended art school and moved to London, where her first serious novel, The Wind Changes, was published in 1937.

Manning returned to London after the war and lived there until her death in 1980; she wrote poetry, short stories, novels, non- fiction, reviews, and drama for the British Broadcasting Corporation. She was described as shy and prone to tantrums; her tendency to tell boastful tall-ales about her family led to ostracism by her peers. Supported by her father, Manning wrote extensively, especially novels, especially Rider Haggard novels. Her mother discouraged such pursuits, and confiscated material she thought unsuitable for her daughter. In May 1928 she had a painting selected for an exhibition at the Municipal School of Art, where a fellow student described her as intellectual and aloof. At 16, she worked as a typist and spent some time in a beauty salon as a junior artist. At the age of 18, she was selected for a painting exhibition for the South South Art Gallery in Southall, London. She had a baby son, Oliver, who was the centre of his mother’s attention, much to the displeasure of Manning, who made several childish attempts to harm him. Manning and her husband had affairs, but they never contemplated divorce. As she had feared, real fame only came after she died in 1980, when an adaptation of FortunES of War was televised in 1987. She died of a heart attack in a London hotel room in December 1988. She is survived by her husband R. D. Smith, a British Council lecturer posted in Bucharest, Romania.

You want to know more about Olivia Manning?

This page is based on the article Olivia Manning published in Wikipedia (as of Nov. 02, 2020) and was automatically summarized using artificial intelligence.