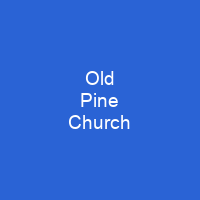 Old Pine Church is a mid-19th century log church in West Virginia, United States. The church was built in 1838 to serve as a nondenominational \”union church” It may also have been built as a meeting place for Schwarzenau Brethren adherents. It was added to the National Register of Historic Places on December 12, 2012.

About Old Pine Church in brief

Old Pine Church is a mid-19th century log church in West Virginia, United States. The church was built in 1838 to serve as a nondenominational \”union church\”. It may also have been built as a meeting place for Schwarzenau Brethren adherents. It was added to the National Register of Historic Places on December 12, 2012, due to its \”significant settlement-era rural religious architecture in the Potomac Highlands” The church and cemetery are situated on 2. 3 acres atop a bluff to the west of United States Route 220, at an elevation of 1,129 feet. The property is surrounded by old-growth forests. The land tract was originally part of the Northern Neck Proprietary, a land grant that the exiled Charles II awarded to seven of his supporters in 1649 during the English Interregnum. In 1878, the church’s congregation split into White Pine Church of the Brethren and Old Pine Church congregations. Both congregations continued to use the church until 1907. In 1968, residents of the Purgitsville community raised the necessary funds to perform a restoration of the church. It is one of the earliest extant log churches in Hampshire County, along with Capon Chapel and Mount Bethel Church. It reportedly housed a school in the early 20th century while still serving as a center for worship. The church’s interior ceiling measures approximately 15 feet in height and is clad in pressed metal panels. Several of its pews date from 1857. The earliest extant gravestone dates from 1834, and several unmarked interment sites may exist from as early as 1759.

The Church is in a rural area of southwestern Hampshire County within the Mill Creek valley. The valley was one of first parts of present-day Hampshire County settled by whites in the mid-18th century. As the valley’s population grew, the unincorporated community of Purgitsville developed along Mill Creek as a trading post and trading village. It grew to include a post office, a small store, a blacksmith shop, and possibly a small church building as late as 1814 and possibly early as early 1814. The Trough on the South Branch PotomAC River is located across Mill Creek Mountain, approximately 3 miles to the east of the Church. The park was named for Henry Purgitt, who acquired 400 acres in the Mill creek valley on January 7, 1785, and received a further land transfer of 137 acres in 1794, during the course of the 19th century, during which time it grew to including a small post office and blacksmith store. In 1719, Lord Fairfax sought to entice white settlers to the sparsely settled lands of his Northern Neckproprietary. Following the Restoration in 1660, Charles II finally ascended to the English throne. Charles II renewed the Northernneck Pro Prietary grant in 1662, revised it in 1669, and again renewed the original grant favoring original grantee Thomas Colepeper, 2nd BaronColepeper and Henry Bennet, 1st Earl of Arlington.

You want to know more about Old Pine Church?

This page is based on the article Old Pine Church published in Wikipedia (as of Nov. 30, 2020) and was automatically summarized using artificial intelligence.