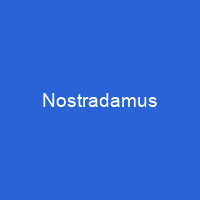 Michel de Nostredame was a French astrologer, physician and reputed seer. He is best known for his book Les Prophéties, a collection of 942 poetic quatrains allegedly predicting future events. Catherine de’ Medici became one of his foremost supporters. Most academic sources reject the notion that Nostradamus had any genuine supernatural prophetic abilities.

About Nostradamus in brief

Michel de Nostredame was a French astrologer, physician and reputed seer. He is best known for his book Les Prophéties, a collection of 942 poetic quatrains allegedly predicting future events. Nostradamus’s family was originally Jewish, but had converted to Catholic Christianity before he was born. He studied at the University of Avignon, but was forced to leave after just over a year when the university closed due to an outbreak of the plague. Catherine de’ Medici became one of his foremost supporters. He first married in 1531, but his wife and two children died in 1534 during another plague outbreak. He fought alongside doctors against the plague before remarrying to Anne Ponsarde, with whom he had six children. He suffered from severe gout toward the end of his life, which eventually developed into edema. He died on 2 July 1566. Many popular authors have retold apocryphal legends about his life. In the years since the publication of his Les Pro phéties he has attracted many supporters, who, along with much of the popular press, credit him with having accurately predicted many major world events. Most academic sources reject the notion that Nost radamus had any genuine supernatural prophetic abilities. They maintain that the associations made between world events and Nostradarus’s quat rains are the result of misinterpretations or mistranslations. They also point out that English translations are almost always of extremely poor quality, based on later manuscripts, and often deliberately mistranslated to make the prophecies fit whatever events the translator believed they were supposed to have predicted.

He was born on either 14 or 21 December 1503 in Saint-Rémy-de-Provence, France, where his claimed birthplace still exists, and baptized Michel. His father, Cresquas, was a grain and money dealer based in Avign on, but converted to Catholicism around 1459–60, taking the Christian name ‘Pierre’ and the surname ‘Nostredame’ He was one of at least nine children of notary Jaume de Nost redame and Reynière. His maternal great-grandfather Jean de St. Rémy disappears from the historical record after 1504 when the child was only one year old. He worked as an apothecary for eight years from 1521 to 1529, researching herbal remedies, his own remedies, and his own medicine. In 1529 he entered Montpellier University to study for a doctorate in medicine. However, he was expelled shortly afterwards by the student procurator, Guillaume Rondelet, when it was discovered that he had been slandering doctors and had been banned by the university statutes, expressly by the statutes, and called ‘Doctor’. The document, 2 folio 87, still exists in the library of the faculty of medicine, and some of his publishers would later call him “Doctor”.

You want to know more about Nostradamus?

This page is based on the article Nostradamus published in Wikipedia (as of Jan. 08, 2021) and was automatically summarized using artificial intelligence.