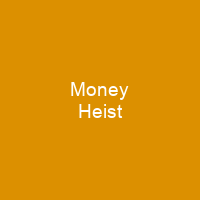 Money Heist is a Spanish heist crime drama television series created by Álex Pina. The series traces two long-prepared heists led by the Professor on the Royal Mint of Spain, and one on the Bank of Spain. It had its original run of 15 episodes on Spanish network Antena 3 from 2 May 2017 through 23 November 2017. Netflix acquired global streaming rights in late 2017 and re-cut the series into 22 shorter episodes.

About Money Heist in brief

Money Heist is a Spanish heist crime drama television series created by Álex Pina. The series traces two long-prepared heists led by the Professor on the Royal Mint of Spain, and one on the Bank of Spain. It had its original run of 15 episodes on Spanish network Antena 3 from 2 May 2017 through 23 November 2017. Netflix acquired global streaming rights in late 2017. It re-cut the series into 22 shorter episodes and released them worldwide, beginning with the first part on 20 December 2017, followed by the second part on 6 April 2018. In April 2018, Netflix renewed the series with a significantly increased budget for 16 new episodes total. Part 3, with eight episodes, was released on 19 July 2019. Part 4, also with eight episode, wasreleased on 3 April 2020. A documentary involving the producers and the cast premiered on Netflix the same day, titled Money Heist: The Phenomenon. In July 2020, Netflix renew the show for a fifth and final part. The Italian anti-fascist song \”Bella ciao,\” which plays multiple times throughout the series, became a summer hit across Europe in 2018. By 2018, the series was the most-watched non-English language series on Netflix, with a particular resonance coming from viewers from Mediterranean Europe and the Latin American world. It received several awards including best drama series at the 46th International Emmy Awards, as well as critical acclaim for its sophisticated plot, interpersonal dramas, direction, and for trying to innovate Spanish television. The narrative is told in a real-time-like fashion and relies on flashbacks, time-jumps, hidden character motivations, and an unreliable narrator for complexity.

A mysterious man known as \”The Professor\” recruits a group of eight people, who choose cities for code-names, to carry out an ambitious plan. After taking 67 people hostage inside the Mint, the team plans to remain inside for 11 days to print the money as they deal with elite police forces. In the events succeeding the initial heist, the group are forced out of hiding and find themselves preparing for a second heist. The first five lines of the pilot script were chosen at random in the first month of pre-production. The robbers’ city-based code names in part 3 were also taken into account for the new robbers’ new code names, which were also chosen in part 4, although with high viewership resonance with high places with high ratings. The group decide to steal €2.4 billion from the Spanish Bank ofSpain, but have to deal with police forces and hostages as they try to escape. The story is told from the perspective of a woman, Tokyo, and has a strong Spanish identity, where emotional dynamics offset the perfect strategic crime. It was developed to subvert heist conventions and combine elements of the action genre, thrillers and surrealism, while still being credible. Pina saw an advantage over typical heist films in that character development could span a considerably longer narrative arc. Characters were to be shown from multiple sides to break viewers’ preconceptions of villainy and retain their interest throughout the show.

You want to know more about Money Heist?

This page is based on the article Money Heist published in Wikipedia (as of Dec. 14, 2020) and was automatically summarized using artificial intelligence.