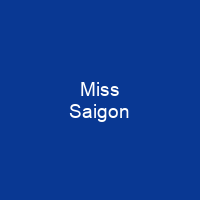 Miss Saigon is a musical by Claude-Michel Schönberg and Alain Boublil. The musical was premièred at the Theatre Royal, Drury Lane, London, on 20 September 1989, closing after 4,092 performances on 30 October 1999. It opened on Broadway at the Broadway Theatre on April 11, 1991, and subsequently played in many other cities.

About Miss Saigon in brief

Miss Saigon is a musical by Claude-Michel Schönberg and Alain Boublil. The musical was premièred at the Theatre Royal, Drury Lane, London, on 20 September 1989, closing after 4,092 performances on 30 October 1999. It opened on Broadway at the Broadway Theatre on April 11, 1991, and subsequently played in many other cities and embarked on tours. It is based on Giacomo Puccini’s 1904 opera Madame Butterfly, and similarly tells the tragic tale of a doomed romance involving an Asian woman abandoned by her American lover. The setting of the plot is relocated to 1970s Saigon during the Vietnam War, and Madame Butterfly’s story of marriage between an American lieutenant and a geisha is replaced by a romance between a United States Marine and a seventeen-year-old South Vietnamese bargirl. Prior to the opening of the 2014 London revival, it was said that Miss Saigon had set a world record for opening day ticket sales, with sales in excess of £4m reported. As of July 2019, Miss SaIGon remains Broadway’s thirteenth longest-running show. The show was inspired by a photograph, which Schönberg found inadvertently in a magazine. It showed a Vietnamese mother leaving her child at a departure gate at Tan Son Nhut Air Base to board an airplane headed for the United States where the child’s father, an ex-GI, would be in a position to provide a much better life for the child.

Highlights of the show include the evacuation of the last Americans in Saigon from the Embassy roof by helicopter while a crowd of abandoned Vietnamese people scream in despair, the victory parade of the new communist regime, and the frenzied night club scene at the time of defeat. Backstage, the girls ready themselves for the night’s show, jeering at Kim’s inexperience. The U.S. Marines, aware that they will soon be leaving Vietnam, party with the Vietnamese sex workers. Chris Scott, a sergeant disenchanted by the club scene, is encouraged by his friend John Thomas to go with a girl. Chris, watching Kim sleep, asks God why he met her just as he was about to leave Vietnam. Touched to learn that Kim is an orphan, Chris offers to take her to America with him. Chris tells John that he is taking leave to spend time with Kim. Kim is reluctant and shy, but dances with Chris. The bargirls hold a wedding ceremony for Chris and Kim, with Gigi Van Tranh toasting the’real’ Miss Saigon. Kim’s cousin, Thuy, arrives at the wedding and promises to take Kim home to North Vietnam. Kim tells Thuy that their marriage is now nullified because she no longer harbours any feelings for him because of his betrayal. Thuy curses them all and storms out when he leaves the same song when he finds her with Chris and the other men drawing guns.

You want to know more about Miss Saigon?

This page is based on the article Miss Saigon published in Wikipedia (as of Dec. 30, 2020) and was automatically summarized using artificial intelligence.