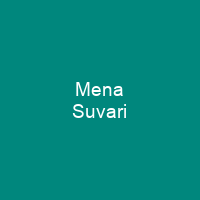 Mena Alexandra Suvari is an American actress, model, and fashion designer. Suvari rose to international prominence for her roles in the 1999 film American Beauty, and in three of the American Pie original films. Her other notable films include Slums of Beverly Hills, Loser, Sugar & Spice, Rumor Has It, Stuck, and You May Not Kiss the Bride.

About Mena Suvari in brief

Mena Alexandra Suvari is an American actress, model, and fashion designer. Suvari rose to international prominence for her roles in the 1999 film American Beauty, and in three of the American Pie original films. Her other notable films include Slums of Beverly Hills, Loser, Sugar & Spice, Rumor Has It, Stuck, and You May Not Kiss the Bride. She played Elizabeth Short in the anthology series American Horror Story: Murder House and reprised the role in American Horror story: Apocalypse and starred in the eight-episode series South of Hell. Suvari has been a model for Lancôme cosmetics and print ads for Lancôme Paris Adaptîve. She is a long-time supporter and activist for the Starlight Children’s Foundation and the African Medical and Research Foundation. She has three older brothers: AJ, Sulev, and Jüri. Her mother is of Greek descent, while her father was an Estonian from Pärnu.Suvari was born in Newport, Rhode Island on February 13, 1979, the daughter of nurse Candice and psychiatrist Ando Suvari. She was considering becoming an archaeologist, astronaut, or doctor when a modeling agency stopped by her all-girls school, Ashley Hall, to offer classes. She began acting with guest appearances in television series such as Boy Meets World and ER at the ages of 15 and 16, respectively. She made the transition to film with the role of Zoe in the 1997 independent coming-of-age drama Nowhere, directed by Gregg Araki and co-starring James Duval, Rachel True, Heather Graham, and Ryan Phillippe.

In American Pie, she starred with Jason Biggs, Shannon Elizabeth, Chris Klein, and Natasha Lyonne, portraying a virgin and innocent choir girl named Heather. She subsequently played a teenager who commits suicide in the horror sequel The Rage: Carrie 2, and appeared as the daughter in the disaster thriller NBC miniseries Atomic Train. She also appeared in a number of episodes of the show High Incident, and played a girl infected with HIV in a one-episode appearance in Chicago Hope. She had a brief part in the thriller Kiss the Girls, opposite Morgan Freeman and Ashley Judd, and had a role in the independent dramedy Slums Of Beverly Hills. She next appeared in the film Slums, which received a limited release, and has developed a cult following. The film received widespread critical acclaim, and was the recipient of the Academy Award for Best Picture. She later reunited with Biggs in the romantic comedy Loser playing the love interest of a small-town, intelligent man, A lukewarm, but handsome man. The New York Times found Suvari to be handsome and matched to be “well matched with the handsome man” Suvari subsequently received a BAFTA Award nomination for Best Supporting Actress for American Beauty and was nominated for a Golden Globe and an Oscar for Best Actress in the movie American Pie.

You want to know more about Mena Suvari?

This page is based on the article Mena Suvari published in Wikipedia (as of Nov. 29, 2020) and was automatically summarized using artificial intelligence.