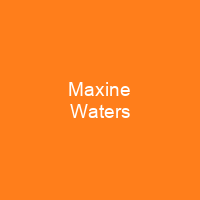 Maxine Moore Waters is an American politician serving as the U.S. Representative for California’s 43rd congressional district since 1991. She is the most senior of the twelve black women currently serving in Congress. Waters was included in Time magazine’s 100 Most Influential People of 2018.

About Maxine Waters in brief

Maxine Moore Waters is an American politician serving as the U.S. Representative for California’s 43rd congressional district since 1991. A member of the Democratic Party, Waters is currently in her 15th term in the House. She is the most senior of the twelve black women currently serving in Congress, and she chaired the Congressional Black Caucus from 1997 to 1999. Waters was included in Time magazine’s 100 Most Influential People of 2018. Before becoming a U. S. Representative, Waters served in the California State Assembly, to which she was first elected in 1976. As an assemblywoman, she advocated divestment from South Africa’s apartheid regime. In Congress, she has been an outspoken opponent of the Iraq War and has sharply criticized Republican Presidents George H.W. Bush, George W. Bush, and Donald Trump, as well as Democratic President Barack Obama. In 2006 she was involved in the debate over King Drew Medical Center. She asked the Federal Communications Commission to deny a waiver of the cross ownership ban for KTLA-TV, a station owned by the Los Angeles Times. In 2005 Waters testified at the House Committee on Education and the Workforce hearings on enforcement of Federal Anti-Fraud Laws in For-Profit Education. She said the American College of Medical Technology was a “problem school” in her district. At a Democratic super-delegate meeting, Waters raised the specter of costly legal battles to defend her station’s broadcast rights. She was ultimately unsuccessful in her petition to force the paper to either sell its station or risk losing that station’s broadcast rights, according to the Cable & Broadcasting & Broadcasting Association.

She has been reelected consistently from this district, renumbered as the 35th district in 1992 and as the 43rd in 2012, with at least 70 percent of the vote. Waters has represented large parts of south-central Los Angeles and the Los Los Angeles coastal communities of Westchester and Playa Del Rey. She worked in a garment factory and as a telephone operator before being hired as an assistant teacher with the Head Start program in Watts in 1966. In 1973, Waters went to work as chief deputy to City Councilman David S. Cunningham, Jr. Then was elected to the California state Assembly in 1976, and ascended to the position of Democratic Caucus Chair for the Assembly. Upon the retirement of Augustus F. Hawkins in 1990, Waters waselected to the United States House of Representatives forCalifornia’s 29th congressional district with over 79% of the popular vote. She is currently the chairwoman of the House Financial Services Committee, and is the second most senior member of California’s congressional delegation after Nancy Pelosi. The presiding officer, Carrie Meek, classed her behavior as \”unruly and turbulent\”, and threatened to have the Sergeant at Arms present her with the Mace of theHouse of Representatives. As of 2017, this is theMost recent instance of the mace being employed for a disciplinary purpose. Waters was eventually suspended from the House for the rest of the day.

You want to know more about Maxine Waters?

This page is based on the article Maxine Waters published in Wikipedia (as of Jan. 04, 2021) and was automatically summarized using artificial intelligence.