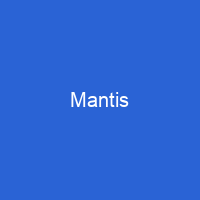 Mantises are an order of insects that contains over 2,400 species in about 430 genera in 30 families. They have triangular heads with bulging eyes supported on flexible necks. Their elongated bodies may or may not have wings, but all Mantodea have forelegs that are greatly enlarged and adapted for catching and gripping prey.

About Mantis in brief

Mantises are an order of insects that contains over 2,400 species in about 430 genera in 30 families. They have triangular heads with bulging eyes supported on flexible necks. Their elongated bodies may or may not have wings, but all Mantodea have forelegs that are greatly enlarged and adapted for catching and gripping prey. The closest relatives of mantises are the termites and cockroaches, which are all within the superorder Dictyoptera. Mantises are mostly ambush predators, but a few ground-dwelling species are found actively pursuing their prey. Females sometimes practice sexual cannibalism, eating their mates after copulation. A cultural trope popular in cartoons imagines the female mantis as a femme fatale. The order is occasionally called the mantes, using a Latinized plural of Greek mantis. The name mantid properly refers only to members of the family Mantidae, which was, historically, the only family in the order. The earliest mantis fossils are about 140 million years old, from Siberia. Fossils of the group are rare, including one from Japan with spines on the front legs as modern mantises, have been found in Cretaceous amber. Most fossils in amber are nymphs; compression fossils include adults from the Crato Formation in Brazil. Fossil mantises have large triangular heads, with a large X-ray tomography to be computed as small through 5 μm through 5 X 5 X X tomography; they have a large, triangular head with a small triangular head and a small X-Ray tomography in 2003, described as a Santanmantis axeldi, described in 2003.

They normally live for about a year. In cooler climates, the adults lay eggs in autumn, then die. The eggs are protected by their hard capsules and hatch in the spring. They are predominantly found in tropical regions, but some live in temperate areas. Because of the superficially similar raptorial forelegS, mantidflies may be confused with mantises. Their similarity is an example of convergent evolution; mantidfly antennae are shorter and less thread-like, and the raptorial tibia is more muscular than that of a similar-sized mantis and bends back further in preparation for shooting out to grasp prey. Mantises, along with stick insects, were once placed in theorder Orthoptera with the cockroached and rock crawlers. The name MantodeA is formed from the Ancient Greek words meaning ‘prophet’ and ‘form’. It was coined in 1838 by the German entomologist Hermann Burmeister. The vernacular plural ‘mantises’ was confined largely to the US, with “mantids’ predominantly used as the plural in the UK and elsewhere, until theFamily Mantidae was further split in 2002. The Mantodesa have been revised substantially as of 2019.

You want to know more about Mantis?

This page is based on the article Mantis published in Wikipedia (as of Dec. 02, 2020) and was automatically summarized using artificial intelligence.