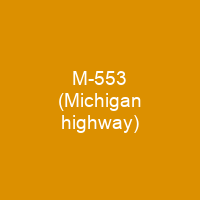 M-553 is a north–south state trunkline highway in the Upper Peninsula of the US state of Michigan. It connects M-35 near Gwinn with the Marquette Bypass, an expressway carrying US Highway 41 and M-28 in Marquette. M-553 connects Marquette with Sawyer International Airport at the unincorporated community of K.I. Sawyer AFB.

About M-553 (Michigan highway) in brief

M-553 is a north–south state trunkline highway in the Upper Peninsula of the US state of Michigan. It connects M-35 near Gwinn with the Marquette Bypass, an expressway carrying US Highway 41 and M-28 in Marquette. M-553 connects Marquette with Sawyer International Airport at the unincorporated community of K. I. Sawyer AFB, the former site of a US Air Force base. The trunkline was originally County Road 553 in Marquettes County. It was transferred to the jurisdiction of the Michigan Department of Transportation on October 1, 1998. In 2005, control of various roadways was exchanged between the City of Marquette and MDOT, and M 553 was extended through the city. The highway terminates at a left intersection with the US 41M-28 expressway; McClellan Avenue continues north of the terminus through a business district to a residential area. It is maintained by MDOT as part of a part of these trunkline highways, which tracks the volume of traffic that uses the roadways under its jurisdiction. In 2010, MDOT’s surveys showed that on average, 3,615 vehicles on this segment of roadway on a daily statistical calculation of the average number of vehicles on a segment of the roadway. The state highway was signed in the 1930s and was fully paved in the 1940s, and a segment was relocated in the 1950s. In the early 1990s, the city extended one of their streets southward to connect to CR 553. In this area, the trunkline is parallel to a line of the Canadian National Railway which connects mines of the Marquettes Iron Range to Escanaba.

It runs through an intersection with M-94 near the west gate of the former K.I. Sawyer Air Force Base. On the north side of the airport, the highway intersects Kelly Johnson Memorial Drive, the airport access road named for Clarence \”Kelly\” Johnson, who helped design the SR-71 \”Blackbird\” reconnaissance aircraft and member of the International Aerospace Hall of Fame. It ends at the intersection with CR 480 at the Crossroads area just north of the Sands Plains and the Blueberry Ridge ski trail; the area around the intersection has several businesses. It descends through a series of curves, first to the northwest and then a steep downhill curve, northeasterly alongside the Marquete Mountain ski area. North of the river, the roadway ascends part of the west side of Mount Mesnard before leveling off near the intersection of Division Street. With few exceptions, the adjacent properties in this area do not have direct access to the highway in this section of the highway. There is a pedestrian bridge over the roadway adjacent to the school, and north overpass the center turn lane ends. M-554 was turned over to the city’s jurisdiction after the transfer was complete in 2005, and was unsigned by the state with only city street signs to indicate its existence.

You want to know more about M-553 (Michigan highway)?

This page is based on the article M-553 (Michigan highway) published in Wikipedia (as of Dec. 07, 2020) and was automatically summarized using artificial intelligence.