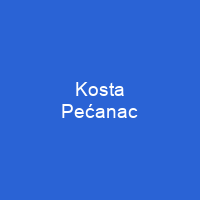 Kosta Milovanović Pećanac was a Serbian and Yugoslav Chetnik commander. He fought in the Balkan Wars, World War I and World War II. He was known for his strong hostility to the Yugoslav Communist Party. He died in 1944, having been killed by agents of Draža Mihailović in May or June 1944.

About Kosta Pećanac in brief

Kosta Milovanović Pećanac was a Serbian and Yugoslav Chetnik commander. He fought in the Balkan Wars, World War I and World War II. He was known for his strong hostility to the Yugoslav Communist Party. As president of the Chetnik Association during the 1930s, he transformed it into an aggressively partisan Serb political organisation with over half a million members. He collaborated with both the German military administration and their puppet government in the German-occupied territory of Serbia. He died in 1944, having been killed by agents of Draža Mihailović in May or June 1944. He is buried in the village of Dečani, near Peć, Serbia, where he was born in 1879. His father Milovan was a guardian of the Visoki dečani monastery, and his brother Milosav fought in Russo-Turkish War of 1877–1878. His parents were killed in an attack by Albanians on the monastery in 1883. He arrived in Serbia in 1892 at the age of 14 and worked as a mercenary. When he was 21, he was called up for army service and served in the engineer corps, becoming a reserve officer. He later worked with the border gendarmerie near Vranje as a corporal and later joined the Chetniks. In 1903, he fought against the Ottoman army in several significant battles including that of Šuplja Stena and Čelopek.

In 1907, he led several major battles between Christmas period between 1905 and 1907. In 1908, he married Sofia Milosovljević and went on to have four children with her. In 1910, as the struggles in Macedonia intensified, he left his children and returned to the battlefield and fought from October 1912 to May 1913. He took part in the defeat of the Albanians in the Battle of Merdare, and took the rank of sergeant in the Morava Division. While serving with them he was given the nickname ‘Pećanacs’, derived from the name of the town in which he grew up. In the First Balkan War, fought from May 1913 to October 1912, he took part in the battle of Kdaredare. In 1913 he was mobilised in the Serbian Third Army, holding the rank of sergeant. In 1914, he became a captain in the Serb Third Army. In 1915, he joined the Serbian Fourth Army and fought in several battles against the Ottomans in the Skopje region. In 1916 he was made a colonel. In 1917 he was promoted to captain. In 1918 he became the first Serb officer to serve in the Second World War. In 1919 he was awarded the title of vojvoda. In 1921, he received the title at a meeting of the deacon of the Vladika of Žiča and commander Jovan Grković-Gapon.

You want to know more about Kosta Pećanac?

This page is based on the article Kosta Pećanac published in Wikipedia (as of Oct. 29, 2020) and was automatically summarized using artificial intelligence.