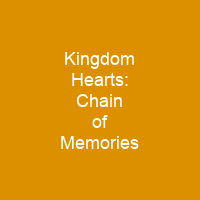 Kingdom Hearts: Chain of Memories is the second game in the Kingdom Hearts series. It is a direct sequel to Kingdom Hearts, and its ending is set about a year before Kingdom Hearts II. The game features a new card-based battle system, in a departure from its predecessor’s real time combat system.

About Kingdom Hearts: Chain of Memories in brief

Kingdom Hearts: Chain of Memories is the second game in the Kingdom Hearts series. It is a direct sequel to Kingdom Hearts, and its ending is set about a year before Kingdom Hearts II. The game features a new card-based battle system, in a departure from its predecessor’s real time combat system. When it debuted in Japan, it sold 104,000 units in 48 hours. It was remade for the PlayStation 2 as Kingdom Hearts Re: Chain of memories, released in Japan as a second disc packaged with Kingdom Hearts 2 Final Mix in March 2007. The remake was later released in North America on December 2, 2008 and was remastered in HD and included in Kingdom Hearts HD 1. 5 ReMix collection released in 2013 for the PS3 and later for PS4 and Xbox One. To advance through the game, the player must utilize Map cards obtained after winning battles to synthesize rooms. The properties of each room, including quality of items and strength of enemies, are determined by the Map cards the player chooses. Each card has a specific effect: red cards affect the number and type of enemies; green cards affects the power of the player’s deck; and blue cards affect a room itself, such as allowing treasure chests or a save point to appear. The player can jump and maneuver around the battle screen as they would on the field map, but all physical attacks, magic, items and summonings are activated by playing cards. Cards are ranked from zero to nine, and are used for making attack combos or breaking enemy cards.

With the exception of zero-ranked cards which are more expensive in terms of Card Points compared to other cards of the same type and have other ranks, more CP are required to place higher- ranked cards in the player’s deck. Breaking an opposing card or combo will stun the loser of that attack or combo as well if it is played after the zero card played by the player. Special cards may be obtained by defeating enemies and bosses to give the player a temporary ability, ranging from enhanced attributes to modifying attributes of offensive and defensive capabilities to modifying the attributes of certain attributes. When the player runs out of cards, the deck must be reloaded, and the player can reload it out of the Game Link Cable. Once completed, ReverseRebirth allows the player to play a second story mode featuring Riku and a link mode where players can battle each other via a Game Link cable. Initially only Sora’s story mode is available; once completed, \”ReverseRebirth\” mode becomes available. The first two are story modes that feature either Sora or Riku. The third is a two player battle mode. Initially only  Sora’s story modes are available; Initially  the player can only play a story mode that features either Sora and Riku, and a second battle mode that includes a two-player battle mode featuring Sora and Riku. The fourth and final mode is a battle mode for two players.

You want to know more about Kingdom Hearts: Chain of Memories?

This page is based on the article Kingdom Hearts: Chain of Memories published in Wikipedia (as of Dec. 07, 2020) and was automatically summarized using artificial intelligence.