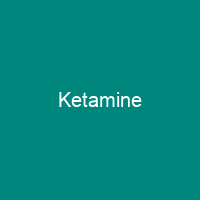 Ketamine is a medication mainly used for starting and maintaining anesthesia. It induces dissociative anesthesia, a trance-like state providing pain relief, sedation, and amnesia. It was extensively used for surgical anesthesia in the Vietnam War due to its safety. Ketamine is on the World Health Organization’s List of Essential Medicines.

About Ketamine in brief

Ketamine is a medication mainly used for starting and maintaining anesthesia. It induces dissociative anesthesia, a trance-like state providing pain relief, sedation, and amnesia. It was extensively used for surgical anesthesia in the Vietnam War due to its safety. Ketamine is on the World Health Organization’s List of Essential Medicines. It is a promising agent for pain and treatment resistant depression. Psychiatric side effects are frequent as well as raised blood pressure and nausea. Liver and urinary toxicity are common among regular abusers of ketamine. It can be used for anesthesia in people with asthma, chronic obstructive airway disease, and with severe reactive airways disease including active bronchospasm. It has similar efficacy to opioids in a hospital emergency department setting for management of acute pain and for control of procedural pain. It may also prevent opioid-induced hyperalgesia and postanesthetic shivering. For chronic pain, ketamine is used as an intravenous analgesic, particularly, if the pain is neuropathic. In multiple clinical trials, Ketamine infusions delivered short-term provided pain relief in pain after traumatic injury, fibromyalgia, and complex regional pain syndrome. However the 2018 consensus guidelines concluded that, overall, there is only weak evidence in favor of Ketamine use in spinal pain, and weak or no evidence for ketamine for CPRS. In particular, only moderate ketamine infusion in CRPS results in improved mood resistant depression in 4 hours or more. Intravenous ketamine treatment for CRPS is improved within 4 hours of the infusion.

It reduces morphine use, pain level, nausea, and vomiting after surgery. It also has the added benefit of counteracting sensitization or sensitization to wind-up phenomena experienced with chronic pain. The drug was discovered in 1956 and approved for use in the U.S. in 1970 and is available as a generic medication. It’s also used as a recreational drug for its hallucinogenic and Dissociative effects. The effects of repeated use have not been sufficiently studied. It appears to be safe in severely injured people and appears to have low risk of respiratory depression. It has been widely used for emergency surgery in field conditions in war zones, for example, during the. Vietnam War. A 2011 clinical practice guideline supports the use ofketamine as a sedative in emergency medicine, including during physically painful procedures. It’s the drug of choice for people in traumatic shock who are at risk of hypotension. It suppresses breathing much less than most other available anesthetics. When used at anesthetic doses,ketamine usually stimulates rather than depresses the circulatory system. It is sometimes possible to administer ketamine anesthesia without protective measures to the airways. The effect of ketaminine on the respiratory and circulatory systems is different from that of other anesthetic. Ketaminine is an option in children, as the sole anesthetic for minor procedures or as an induction agent followed by neuromuscular blocker and tracheal intubation.

You want to know more about Ketamine?

This page is based on the article Ketamine published in Wikipedia (as of Dec. 09, 2020) and was automatically summarized using artificial intelligence.