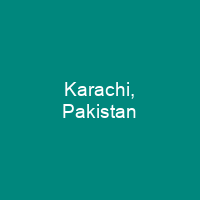 Karachi was founded in 1729 as the fortified village of Kolachi. The city has been known to the ancient Greeks, and may have been the site of Barbarikon, an ancient seaport. Karachi is home to Pakistan’s two largest seaports, the Port of Karachi and Port Bin Qasim, as well as Pakistan’s busiest airport, Jinnah International Airport.

About Karachi, Pakistan in brief

Karachi is the capital of the Pakistani province of Sindh. It is Pakistan’s largest city and the twelfth largest city in the world. Karachi was founded in 1729 as the fortified village of Kolachi. The city has been known to the ancient Greeks, and may have been the site of Barbarikon, an ancient seaport. Karachi is home to Pakistan’s two largest seaports, the Port of Karachi and Port Bin Qasim, as well as Pakistan’s busiest airport, Jinnah International Airport. Approximately 90% of the multinational corporations operating in Pakistan are headquartered in Karachi. Karachi collects more than a third of Pakistan’s tax revenue, and generates approximately 20% of Pakistan’s GDP. Approximately 30% of Pakistani industrial output is from Karachi, while Karachi’s ports handle approximately 95% ofPakistan’s foreign trade. According to the 2017 census, Karachi’s total population was 16,051,521 and its urban population was 14. 9 million. Karachi had become well known for its high rates of violent crime, but recorded crimes sharply decreased following a crackdown operation against criminals, the MQM political party, and Islamist militants initiated in 2013 by the Pakistan Rangers. Karachi went from being ranked the world’s 6th most dangerous city for crime in 2014, to 93rd by early 2020. Karachi is considered to be Pakistan’s fashion capital, and has hosted the annual Karachi Fashion Week since 2009. Karachi has communities representing almost every ethnic group in Pakistan.

It has been home to more than two million Bangladeshi immigrants, a million Afghan refugees, and up to 400,000 Rohingyas from Myanmar. Karachi’s population increased dramatically with the arrival of hundreds of thousands of Muslim refugees from India in the mid 19th century. Karachi experienced rapid economic growth following independence, attracting migrants from throughout Pakistan and South Asia. It was beset by sharp ethnic, sectarian, and political conflict in the 1980s with the arrived of weaponry during the Soviet–Afghan War. The region around Karachi has been theSite of human habitation for millennia. Upper Paleolithic and Mesolithic sites have been excavated in the Mulri Hills along Karachi’s northern outskirts. The site of Krokola, a natural harbor where Alexander Great sailed his fleet for the Indus, may also have been referred to as Ramya in ancient Greek texts. Some believe it was located near the mouth of the Malir River, though some believe it is near the Gizri River. Both areas were based on Greek descriptions until colonial era, when they were renamed Manora and Kiamari, based on the Greek island of Morobara, which was well into the colonial era. The name Bibakta, or Bibara, was used for the first time in a Dutch report from 1742 about a shipwreck near the settlement. The new settlement was named in honour of Mai Kolachi, whose son is said to have slain a man-eating crocodile in the village after his elder brothers had already been killed by it.

You want to know more about Karachi, Pakistan?

This page is based on the article Karachi, Pakistan published in Wikipedia (as of Dec. 29, 2020) and was automatically summarized using artificial intelligence.