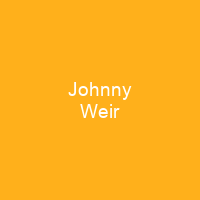 John Weir is an American figure skater and television commentator. He is a two-time Olympian, the 2008 World bronze medalist, and the 2001 World Junior Champion. He joined NBC as a commentator beginning at the Sochi Olympics in 2014. He came out in early 2011 and has been involved with LGBTQ activism.

About Johnny Weir in brief

John Weir is an American figure skater and television commentator. He is a two-time Olympian, the 2008 World bronze medalist, and the 2001 World Junior Champion. He began skating at the age of 12, two or three times older than when most elite skaters start training. Weir retired from competitive figure skating in 2013. He joined NBC as a commentator beginning at the Sochi Olympics in 2014. He came out in early 2011 and has been involved with LGBTQ activism. His costume choices and outspokenness caused conflicts with U. S. Figure Skating, the governing body of the sport in the U.S. Throughout his skating career, he was influenced by Russian approaches to figure skating and developed a connection with Russian history, culture, and language. He was inspired to further pursue figure skating after watching Oksana Baiul compete at the 1994 Winter Olympics, during the sport’s rise in popularity caused by the Nancy Kerrigan attack. Weir is of Norwegian heritage, and has one brother, Brian \”Boz\” Weir, who is four years younger. He graduated from Newark High School, where he graduated in 2002, and studied linguistics at the University of Delaware before dropping out. His family moved to Little Britain, Connecticut, so he could train. He later said that horse riding had given him body awareness, preparing him for figure skating. In his first year of skating, Weir finished fourth as a juvenile in the Junior Olympics in the South Atlantic Regionals and qualified for the Junior Winter Olympics in juvenile pairs, and in intermediate pairs the following year.

In 2004, he became the first skater to win U. S. Nationals three times in a row since Brian Boitano in the late 1980s and the first American to win Cup of Russia in 2007. He has a classical skating style and was known for being \”a very lyrical skater\” and \”an entertaining artesian\”. He is the son of John Weir, a nuclear power plant engineer, and Patti Weir, anuclear power plant worker and home inspector. His father had competed in English saddle events and competed in the Devon Horse Show with his Shetland pony, Shadow. By the time he was 12, Weir was performing single Axels, which he learned after a week of lessons. He learned all the single and double jumps, as well as his first triple jump, the salchow. He competed in both singles and pair, and they moved to Delaware so Weir could train with Priscilla Hill, who had coached many skaters and won national medals as a competitive skater. In 2010, Weir and Hill paired him with Jodi Rudden to help focus on other aspects of figure skating, such as spins, stroking, and artistry, rather than on jumping. In 2012, Weir won the first place in the juvenile Junior Olympics and finished fourth in the first South Atlantic regionals and won the SouthAtlantic Regionals in junior pairs. In 2013, he won the second place in Junior Junior Olympics.

You want to know more about Johnny Weir?

This page is based on the article Johnny Weir published in Wikipedia (as of Jan. 04, 2021) and was automatically summarized using artificial intelligence.