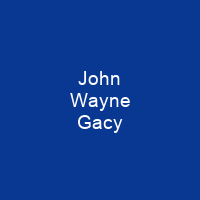 John Wayne Gacy was an American serial killer and sex offender. He assaulted and murdered at least 33 young men and boys. He was executed by lethal injection at Stateville Correctional Center on May 10, 1994. Gacy’s conviction for 33 murders was the most by one individual in U.S. history at the time.

About John Wayne Gacy in brief

John Wayne Gacy was an American serial killer and sex offender. He assaulted and murdered at least 33 young men and boys. He was executed by lethal injection at Stateville Correctional Center on May 10, 1994. Gacy’s conviction for 33 murders was the most by one individual in U.S. history at the time. He performed at children’s hospitals and charitable events as \”Pogo the Clown\” or \”Patches the Clown\”, personas he had devised. He also was active in his local community as a Democratic Party precinct captain and building contractor. All of his murders were committed inside his ranch house near Norridge, a village in Norwood Park Township, metropolitan Chicago, Illinois. He would lure a victim to his home, dupe him into donning handcuffs on the pretext of demonstrating a magic trick, then rape and torture his captive before killing him by either asphyxiation or strangulation with a garrote. He murdered his first victim in 1972, had murdered twice more by the end of 1975, and at least 30 subsequent victims were killed after his divorce from his second wife in 1976. The investigation into the disappearance of Des Plaines teenager Robert Piest led to his arrest on December 21, 1978. He served 18 months in prison for the sodomy of a teenage boy in Waterloo, Iowa in 1968 and was sentenced to 10 years’ imprisonment, but serving 18 months. His father was an auto repair machinist and World War I veteran, and his mother was a homemaker. His paternal grandparents had immigrated to the United States from Poland and his family was Catholic.

He had a difficult relationship with his father, an alcoholic who was physically abusive to his wife and children. His mother tried to shield her son from his father’s abuse, which only resulted in accusations that he was a ‘Mama’s boy’ who would ‘probably grow up queer’ Gacy never told his father about this, afraid that his father would blame him. He later speculated it was to seek acceptance from others that he never received the same acceptance from his dad. In 1960, Gacy became involved in politics, working as an assistant precinct captain for a neighborhood Democratic Party candidate. He bought a car at the same year as his father bought him a car. He died of a heart condition, which he was told to avoid all sports at school. He spent almost a year in hospital between the ages of 14 and 18, and attributed the decline of his grades to missing school. His medical condition was never conclusively diagnosed, and Gacy later estimated that he had been hospitalized on occasion because of the seizures, and in 1957 for a burst appendix. In 1949, his father was informed his son and another boy had been caught sexually fondling a young girl. His father suspected these episodes were an effort to gain sympathy and attention, and openly accused his son of faking the condition as the boy lay in a hospital bed. The same year, a family friend and contractor would sometimes molest Gacy in his truck.

You want to know more about John Wayne Gacy?

This page is based on the article John Wayne Gacy published in Wikipedia (as of Dec. 26, 2020) and was automatically summarized using artificial intelligence.